You’re reading an excerpt of Founding Sales: The Early-Stage Go-To-Market Handbook, a book by Pete Kazanjy. The most in-depth, tactical handbook ever written for early-stage B2B sales, it distills early sales first principles and teaches the skills required, from being a founder selling to being an early salesperson and a sales leader. Purchase the book to support the author and the ad-free Holloway reading experience. You get instant digital access, commentary and future updates, and a high-quality PDF download.

You’ve just closed a new deal. You’re pumped up, having gotten a customer across the line and booked the revenue, with the check in the mail. You’re ready to repeat your success and get another contract signed. In fact, you’re starting to forget about the customer you just sold and turn all your attention to the next prospect.

Don’t give in to that temptation! In a SaaS world, the reality is that the moment you close a new customer, it’s a countdown to when they will be renewing, or not renewing, their contract. And if you don’t ensure their success with your solution, they won’t be renewing. But that’s not the worst of it. Even before renewal comes up, they certainly won’t be buying more seats or units of your solution. And while they’re not buying more, they certainly won’t be telling their friends and colleagues nice things about your solution. They won’t be providing you with delightful marketing-ready testimonial quotes and videos. Worse, if a new leader comes into the organization and does a tool review to see what is being used (and what isn’t), she could easily decide to break your contract—and not pay the remaining installments. Yikes!

While losing out on a renewal is a big problem for your business, unsuccessful customers present all sorts of other problems ahead of that. And you don’t necessarily have a year to fix them. While we talked in prior chapters about the benefits of longer contracts—they give you more time to get a customer to success—that doesn’t mean you can get away with skimping on customer success and then save the contract in a last-minute scramble. There’s actually only a short window in which you have a customer’s attention and faith and can work with them to invest their time and attention in adopting your solution. It’s far easier to get a customer up and running as an extension of the sale process, with all the associated excitement, novelty, and executive buy-in, than to resurrect something that has fallen by the wayside and been deemed a failed purchase.

Now contrast this to a happy customer getting value from your solution. In their first couple weeks using the product, following a successful implementation, they already have some massive wins. And those wins are exactly in line with promises that were made during the sales process, demonstrating that they’re well on their way to achieving the expected ROI. So they decide that more team members should have licenses and ask to double the size of the contract. All the while, because they’re so proud of themselves for being smart purchasers of a new solution, they’re happy to take customer reference calls. In fact, they’ve already recorded a nifty little webcam video raving about your solution, which you’ve embedded into your sales deck. When the decision-maker who purchased your solution gives his talk at the fancy new-technology conference, he cites you as being core to his company’s success. And when one of their users leaves for a new role halfway through the year, her first call is to you to get a license for her new company.

That’s the virtuous cycle you want to be a part of.

Do customer success wrong, and bad things happen. Do it right, and great things happen. How great and how bad? Check out this chart detailing the monthly recurring revenue for three versions of the same hypothetical businesses. 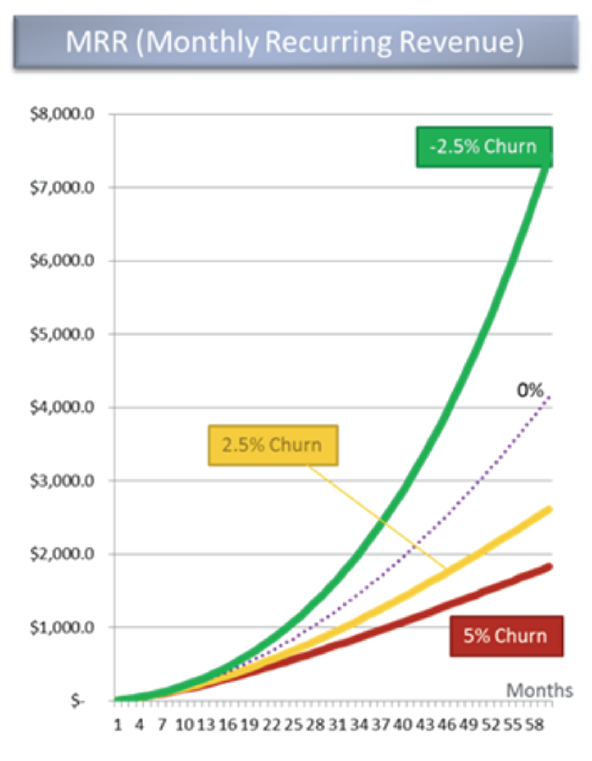 The 0% line shows what recurring revenue would be assuming that all customers stay customers forever. After 58 months, the company is at ~$4M million in MRR. Then look at the yellow line. With 2.5% monthly churn (at the end of every month, 2.5% of total revenue is lost due to customers who cancel), after the same 58 months, MRR is at something like ~$2.8M million. With 5% monthly churn, it’s below ~$2M million. So you would have less than half the revenue that you won at some point in time, and paid marketing and sales expenses to acquire.

Now take a look at the green line. This is what you get when, every month, 2.5% of your existing revenue upsells via expansion. Users and groups that are having success tell other users and other groups, and they buy more widgets, seats, or what have you. After that same 58 months, you’re over ~$7M million in MRR. Pretty impressive.

While this demonstrates the importance of customer success as you scale, it’s even more important when you’re just starting out. Getting those first few customers to take a leap of faith on your solution is hard. Make sure that they get the promised value out of it, and it’ll be that much easier to get the next few customers. And those prospects will have to take less of a leap of faith, since your existing customers have already told them about you over a beer!

Yes, your product can have features that naturally make it viral within an organization, or make it sticky by getting users to put in lots of data. All of that can help with churn reduction and upsell. But none of that happens without first getting customers up and running and successful, quickly. So let’s get you set up to do so.

What Is Good Customer Success?

Above all else, customer success is about fulfilling the promises that were made during the sales process. The customer handed you money in exchange for a promise of value, and now you’re going to deliver that value.

What does that value look like? Conveniently, it’s documented in your sales narrative. Those KPIs (key performance indicators) that you said you were going to raise or lower for the customer? That’s customer success. So if we were TalentBin, this would be all about driving more engineering talent into the top of the customer’s hiring funnel. And if we were Textio, it would be about optimizing job postings such that more applicants would apply per post and posts would attract more diverse applicants. Customer success is about delivering on your ROI promises, and doing so for each of the involved stakeholders. Was there a certain set of value propositions for the manager, but others for the individual? Well, you’re going to want to check both of those boxes, and make both of those customers successful.

You methodically, and in a stepwise fashion, engage with prospects and drive them down the sales pipeline toward being a customer. Now, the same approach will ensure that you deliver the success you promised those customers and find yourself on the happier versions of those revenue graphs above. It’s methodical, in that it will be rigorous the same way your discovery, presentation, demo, and pipeline management was, and stepwise, in that it’s not a question of getting a customer implemented, handing them the keys, and forgetting about them. Rather, after implementation, customer success turns to cadenced check-ins, instrumentation of success markers, and documentation of ROI achieved, all aimed at supporting an airtight case for renewal at the end of the contract.

When it comes to customer success, there are a broad array of tools to get the job done. That said, don’t think that you need to employ all of the approaches we’ll touch on. They are presented in order of most integral to more optional. All will deliver value, but depending on your bandwidth, you may need to pick and choose until you have dedicated customer success staffing. Regardless, they’re all good to have in the back of your head.

The broad bucket of implementation is the set of steps that you take after a customer has signed to get them quickly up and running, and can include technical implementation steps, user training, and more. Depending on the complexity of your solution, this could be as simple as a 30-minute call and guided tour, or as complicated as a multi-month, full-blown professional services engagement. In either case, though, implementation is the first step on the road to customer success, without which you’re putting yourself at a substantial disadvantage. Invest in it accordingly.

You’re reading a preview of an online book. Buy it now for lifetime access to expert knowledge, including future updates.
If you found this post worthwhile, please share!
Related sections
Sales Pitches For Startup Founders
What Is Good Customer Success?