Who is a Digital Nomad?

You’re reading an excerpt from Global Natives: The New Frontiers of Work, Travel, and Innovation, a guide to digital nomads and the work-from-anywhere movement, by Lauren Razavi. Purchase the book for instant digital access.

A digital nomad is someone who works remotely and travels at the same time. Those who fit this label also tend to match other identities, depending on where and who they are—and who’s asking. Like other social groups, nomads often outwardly define themselves in ways that don’t resonate with their own perceptions. They have to tick the right boxes for immigration, insurance, healthcare, and taxes, and the rules and norms often vary drastically between countries. By traditional institutions, nomads might be called expats, tourists, or business travelers. The paperwork might say they’re young people studying or interning abroad, or identify them as retirees on a round-the-world trip.

People often assume nomads are constantly on the move, but each new place takes an investment of time and energy, hassles and costs. There are incentives to stick around a while. Some nomads relocate every year or two, deeply and slowly exploring each area and organizing side trips to nearby cities and countries. Others travel to a new destination every month or six months, getting a feel for the place before moving on. Often, they’ll keep returning to favorite spots, strengthening their connection to a destination and community with each visit.

A study by MBO Partners found that 32% of American nomads planned to be nomadic for less than one year—though as the Hacker Paradise story shows, people often end up staying on or returning to the lifestyle after trying it out—and 54% planned to continue for the next two years.* Rather than establishing a set routine in one home city, nomads adapt to each new place they go. The fundamental human desires stay the same—food, fun, friends, fitness—but the rituals vary from place to place. Nomads design the interactions between their work and other aspects of their lives, optimizing for what they want to see and experience.

Nomads are longer-term visitors than tourists, keen to create stability, habits, and routines that support their productivity and wellbeing, just like everybody else. Many still consider their country of origin to be their home base, and spend regular time there, or in another chosen home, each year. Whatever their travel pattern, the defining feature of the nomad mindset is a flexible attitude toward location. They aren’t choosing the life of a settler, but of a slow-traveling nomad.

For me, life looks different—but in other ways, entirely consistent—depending on my location. Long summer walks are my exercise in Amsterdam, while I’ll hit the gym and pool in my building in Kuala Lumpur. Lunch in the UK may be a sandwich from an outdoor market, while it’s likely to be a plate of rice from a hawker center in Singapore. Wherever I am, I’ll probably play Pokémon Go on my smartphone to explore new neighborhoods. I almost always know the location of the best specialty coffee shop—a global craft culture that crosses national boundaries. I might also do karaoke in Thailand, hop between cocktail bars in Hong Kong, and have a beach barbecue in Melbourne. Like most of the nomads I’ve met, I’m a great believer in doing what’s good in a place—usually whatever the locals do—to keep myself entertained, even if it’s something I wouldn’t instinctively choose to do elsewhere.

These lifestyle differences are an inherent part of the fun of all travel, and they’re also what prompt an important process of self-reflection and personal growth during nomad trips. Through travel, people come to understand what shapes their sense of identity, community, home, and belonging. And their thinking is constantly challenged by cultural and social differences, giving them a uniquely global perspective.

People often question the long-term viability of living as a digital nomad, which is a valid response if you understand most of us to be location-hopping every other week. But the nomad reality is slower-paced, and mainly concerned with the idea of creating the life you want, in the place that suits you best, unhindered by the requirements of conventional work.

How Many Nomads Are There?

Because nomads are such a fluid group, few governments, institutions, or organizations invested in surveys and research related to them in the 2010s. There just wasn’t much incentive while nomadism was still a fringe movement. Today, though, visa and border policy are beginning to modernize, spurred by the global shift to remote work. We’ll explore how this is playing out in the later parts of the book, but what you need to know for now is that who exactly nomads are is difficult to measure, quantify, and analyze.

Since 2018, the consultancy firm MBO Partners has published a yearly State of Independence in America survey, one of few studies to collect data about digital nomads. While the survey only covers US residents, the 2021 edition found that 15.5 million Americans already identify as digital nomads (up from 10.9 million in 2020 and 7.3 million in 2019).* It also indicated that 65 million Americans are either planning to become digital nomads within three years, or are considering it. If those numbers prove accurate, 25% of the US population could be nomadic by the middle of the decade. 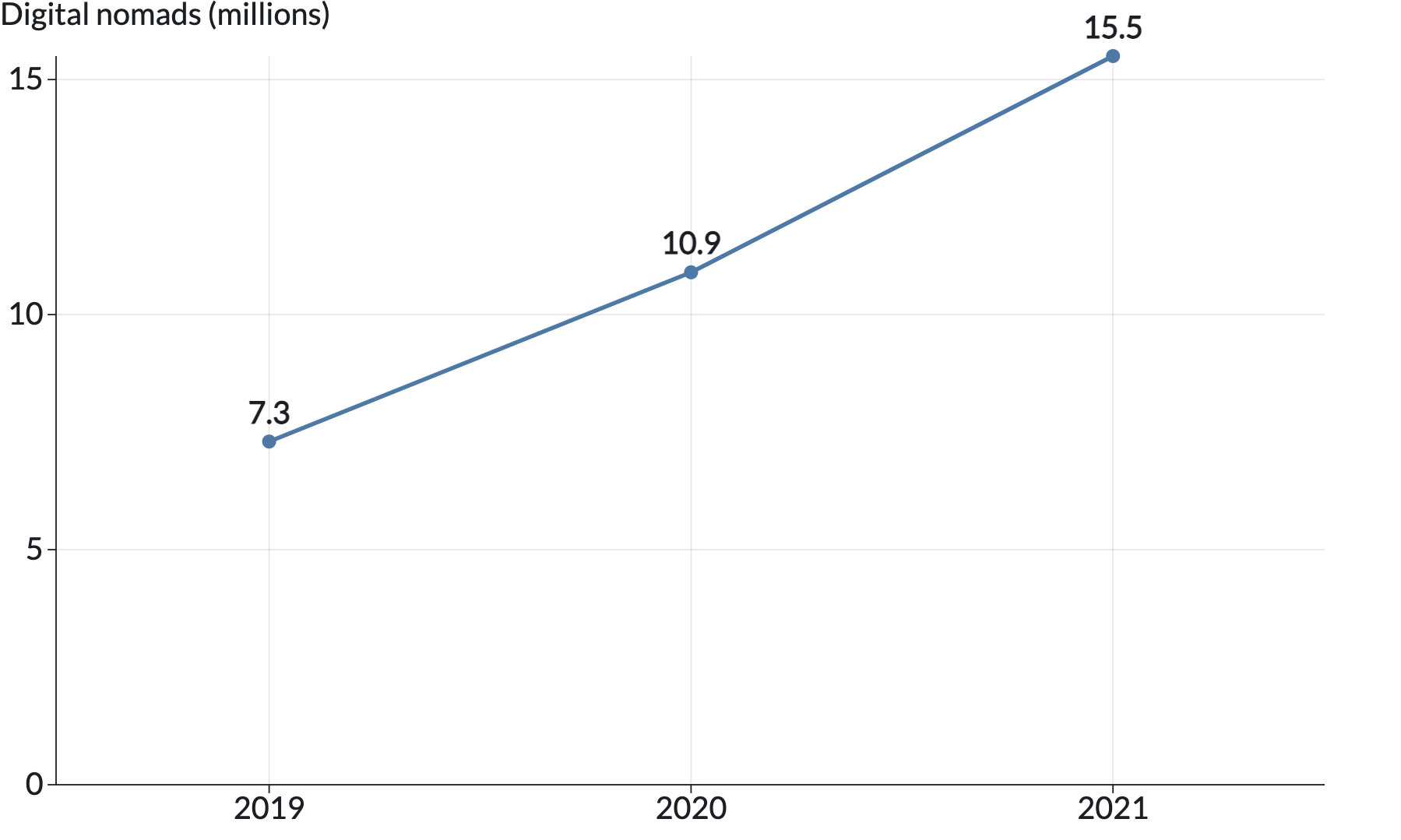 ​
You’re reading a preview of an online book. Buy it now for lifetime access to expert knowledge, including future updates.
If you found this post worthwhile, please share!
Related sections
Part I: An Assignment in Bali
Part II: Understanding Digital Nomads
The Nomad Work Philosophy
What Makes a Nomad Hub?