The Writing of the Book

The Writing of the Book

It is fitting that Miss Keller’s Story of My Life should appear at this time. What is remarkable in her career is already accomplished, and whatever she may do in the future will be but a relatively slight addition to the success which distinguishes her now. That success has just been assured, for it is her work at Radcliffe during the last two years which has shown that she can carry her education as far as if she were studying under normal conditions. Whatever doubts Miss Keller herself may have had are now at rest.

Several passages of her autobiography, as it appeared in serial form, have been made the subject of a grave editorial in a Boston newspaper, in which the writer regretted Miss Keller’s apparent disillusionment in regard to the value of her college life. He quoted the passages in which she explains that college is not the “universal Athens” she had hoped to find, and cited the cases of other remarkable persons whose college life had proved disappointing. But it is to be remembered that Miss Keller has written many things in her autobiography for the fun of writing them, and the disillusion, which the writer of the editorial took seriously, is in great part humorous. Miss Keller does not suppose her views to be of great importance, and when she utters her opinions on important matters she takes it for granted that her reader will receive them as the opinions of a junior in college, not of one who writes with the wisdom of maturity. For instance, it surprised her that some people were annoyed at what she said about the Bible, and she was amused that they did not see, what was plain enough, that she had been obliged to read the whole Bible in a course in English literature, not as a religious duty put upon her by her teacher or her parents.

I ought to apologize to the reader and to Miss Keller for presuming to say what her subject matter is worth, but one more explanation is necessary. In her account of her early education Miss Keller is not giving a scientifically accurate record of her life, nor even of the important events. She cannot know in detail how she was taught, and her memory of her childhood is in some cases an idealized memory of what she has learned later from her teacher and others. She is less able to recall events of fifteen years ago than most of us are to recollect our childhood. That is why her teacher’s records may be found to differ in some particulars from Miss Keller’s account.

The way in which Miss Keller wrote her story shows, as nothing else can show, the difficulties she had to overcome. When we write, we can go back over our work, shuffle the pages, interline, rearrange, see how the paragraphs look in proof, and so construct the whole work before the eye, as an architect constructs his plans. When Miss Keller puts her work in typewritten form, she cannot refer to it again unless some one reads it to her by means of the manual alphabet.

This difficulty is in part obviated by the use of her braille machine, which makes a manuscript that she can read; but as her work must be put ultimately in typewritten form, and as a braille machine is somewhat cumbersome, she has got into the habit of writing directly on her typewriter. She depends so little on her braille manuscript, that, when she began to write her story more than a year ago and had put in braille a hundred pages of material and notes, she made the mistake of destroying these notes before she had finished her manuscript. Thus she composed much of her story on the typewriter, and in constructing it as a whole depended on her memory to guide her in putting together the detached episodes, which Miss Sullivan read over to her.

Last July, when she had finished under great pressure of work her final chapter, she set to work to rewrite the whole story. Her good friend, Mr. William Wade, had a complete braille copy made for her from the magazine proofs. Then for the first time she had her whole manuscript under her finger at once. She saw imperfections in the arrangement of paragraphs and the repetition of phrases. She saw, too, that her story properly fell into short chapters and redivided it.

Partly from temperament, partly from the conditions of her work, she has written rather a series of brilliant passages than a unified narrative; in point of fact, several paragraphs of her story are short themes written in her English courses, and the small unit sometimes shows its original limits.

In rewriting the story, Miss Keller made corrections on separate pages on her braille machine. Long corrections she wrote out on her typewriter, with catch-words to indicate where they belonged. Then she read from her braille copy the entire story, making corrections as she read, which were taken down on the manuscript that went to the printer. During this revision she discussed questions of subject matter and phrasing. She sat running her finger over the braille manuscript, stopping now and then to refer to the braille notes on which she had indicated her corrections, all the time reading aloud to verify the manuscript. 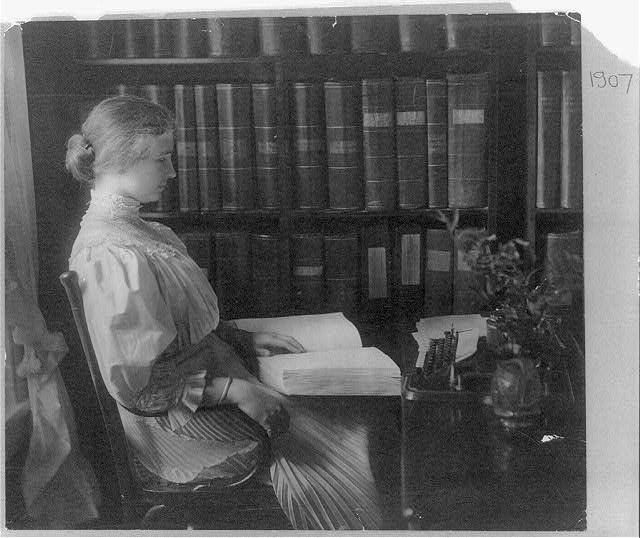 She listened to criticism just as any author listens to his friends or his editor. Miss Sullivan, who is an excellent critic, made suggestions at many points in the course of composition and revision. One newspaper suggested that Miss Keller had been led into writing the book and had been influenced to put certain things into it by zealous friends. As a matter of fact, most of the advice she has received and heeded has led to excisions rather than to additions. The book is Miss Keller’s and is final proof of her independent power.

Mark Twain has said that the two most interesting characters of the nineteenth century are Napoleon and Helen Keller. The admiration with which the world has regarded her is more than justified by what she has done. No one can tell any great truth about her which has not already been written, and all that I can do is to give a few more facts about Miss Keller’s work and add a little to what is known of her personality.

Miss Keller is tall and strongly built, and has always had good health. She seems to be more nervous than she really is, because she expresses more with her hands than do most English-speaking people. One reason for this habit of gesture is that her hands have been so long her instruments of communication that they have taken to themselves the quick shiftings of the eye, and express some of the things that we say in a glance. All deaf people naturally gesticulate. Indeed, at one time it was believed that the best way for them to communicate was through systematized gestures, the sign language invented by the Abbe de l’Epee.

When Miss Keller speaks, her face is animated and expresses all the modes of her thought—the expressions that make the features eloquent and give speech half its meaning. On the other hand she does not know another’s expression. When she is talking with an intimate friend, however, her hand goes quickly to her friend’s face to see, as she says, “the twist of the mouth.” In this way she is able to get the meaning of those half sentences which we complete unconsciously from the tone of the voice or the twinkle of the eye.

You’re reading a preview of an online book. Buy it now for lifetime access to expert knowledge, including future updates.
If you found this post worthwhile, please share!