You’re reading an excerpt of Land Your Dream Design Job, a book by Dan Shilov. Filled with hard-won, personal insights, it is a comprehensive guide to landing a product design role in a startup, agency, or tech company, and covers the entire design interview process from beginning to end, for experienced and aspriring designers. Purchase the book to support the author and the ad-free Holloway reading experience. You get instant digital access, commentary and future updates, and a high-quality PDF download.

Trendy Ping-Pong tables, fun swag, cool off-sites. Some of these things may come to mind when we reference a company’s culture. In reality, perks are just surface characteristics of a culture, which usually runs much deeper—it’s the way things get done in an organization. Some companies may look great from the outside, but inside the reality is different. When interviewing for companies, it’s important to find out the real deal (usually by interviewing the company after you’ve got your offer, and at the same time it helps to think about companies’ characteristics that are important to you—that is, which environment aligns best with your values.

How do you determine a company’s culture? One way to understand culture is by looking at how the company wants to present itself. Usually that’s a company’s mission statement or its list of values. But beware, what’s preached is not always practiced. To ensure it performed at the highest level of ethics, one company put together a statement of human rights and espoused values, such as respect, integrity, communication, and excellence. The company, Enron, is now a popular case study in values gone wrong—the value they rewarded was the opposite of what was written.

One way to think about a company’s culture is through its actions. How does it get things done?

Some aspects of a company’s culture may be defined by the industry that it operates in. For example, healthcare companies, including startups, may face a long and rigorous evaluation process before launching their consumer healthcare device to the public. Opposite on the spectrum of industries are tech companies and startups. Going too slow at a startup may be the end of it. As an example, when Facebook was rapidly growing, the common mantra was “move fast and break things.” It was a rallying cry to get employees to make decisions quickly even if mistakes happened along the way.

What does this mean for design? Cultures that value a bias for action sometimes encourage a very rough, move-fast-at-all-costs type of design. This can leave you as a designer frustrated because the work is just a series of minimum viable designs that never get polished. At the other extreme is a culture that focuses too much on research and evaluation. Sometimes this leads to projects that have many hours put against them but for one reason or another were cancelled in the final stages.

​story​In one past company, design was kept to a bare minimum. In fact, engineering sometimes would start building first and design would have to catch up. While this bias for action got features launched, many of them were later scrapped. Lack of strategy (that design could have informed) led to wasted work. 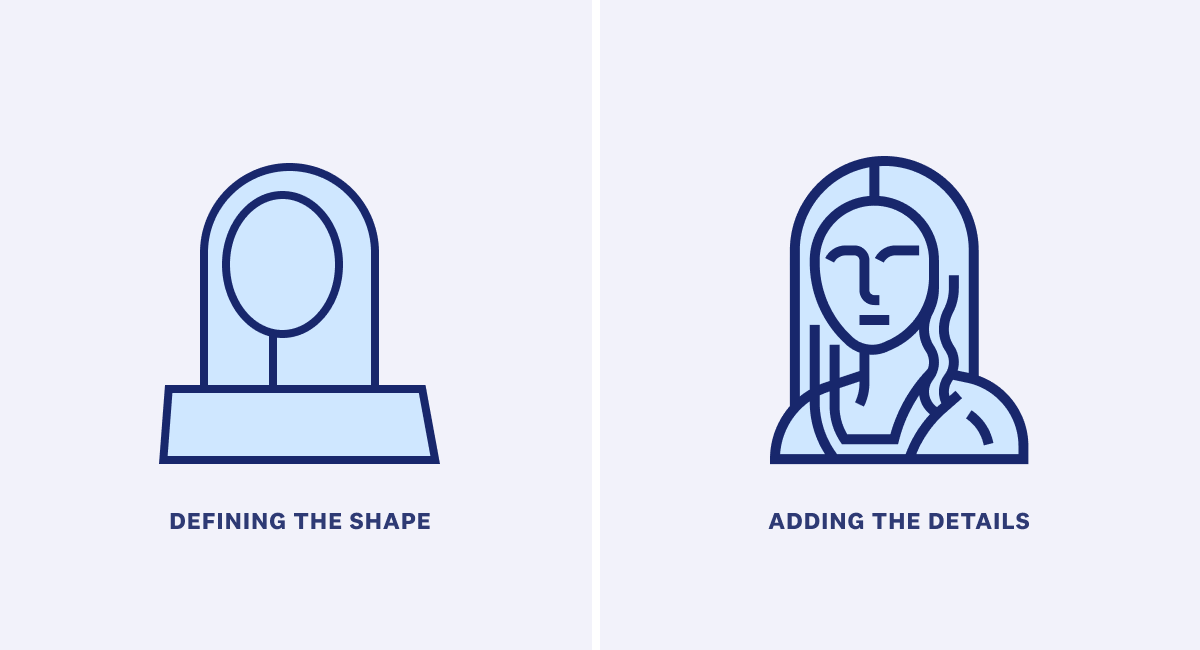 The ideal is somewhere in the middle. Angel Steger (Director of Design at Facebook) likens the product design process to carving out an ice sculpture. You’ll need a chainsaw to hack away at the general shape of the work, but you’ll need the chisel to get into the finer details. Doing everything with a chainsaw will get the job done, but that’s about it. At the same time, doing too much chiseling may end up wasting precious time as the ice melts. Striking the balance between the two creates a ripe opportunity for you as a designer to create with speed while learning and filling out the details as the general design takes shape.

This characteristic is usually tied to a company’s growth stage. Unless they are in dire straits, it’s rare for a large, successful company to make big bets that could potentially bankrupt the whole company. Early-stage startups, on the other hand, are always in dire straits; they have to swing for the fences otherwise it’s very likely they’ll go out of business. As companies mature they gain more shareholders. The IPO brings a whole new level of responsibilities and sometimes a myopic view focusing solely on quarterly numbers.

​confusion​ Playing it safe in a startup? You may be surprised to see risk averse and startup together in the same sentence. But it can happen. Startups that are data-driven (as opposed to data-informed) usually make good decisions (raising the floor of the experience), but they rarely break lead in the industry (by breaking through the ceiling).

Generally, risk averse companies tend to place a premium on shipping work that’s more “buttoned up.” The final product has gone through multiple rounds of iterations, reviews, and so on, and every pixel has been interrogated. If the company’s design maturity is high, this might push designers to create their best work. However, if the company lacks design vision or is in the low design maturity stage, this may feel like a “swoop and poop” where an executive comes up at the last minute and completely discards or discredits the work.

What about companies that encourage risk taking—what’s their relationship with design? In the case of an early stage startup your work may be more conceptual, focusing on finding the right product market fit. Usually this means lots of divergent explorations, iterations, and experiments, all to find a few promising ideas to build. From a company perspective, it’s critical to evaluate multiple options quickly without settling on a subpar solution. Designers can play a major role at this stage, helping the company find its customers and potentially take off in a big way. However, the road there is not without bumps and setbacks. Ultimately, it depends on your appetite and level of risk-taking.

Within the company’s culture—and perhaps the most important part—is the culture of the team you’ll be working on. In smaller companies this means you’ll have a close relationship with your cross-functional peers: product managers, engineering, and so on. Be sure to get to know these folks, as you’ll be working with them more closely than with other designers.

​confusion​ The industry sometimes uses the term three-legged stool to describe a team made up of a designer, product manager, and lead engineer. I use the term squad, because modern teams usually have additional contributors, such as research, operations, data scientists, and so forth, depending on the company.

In some companies there may not be a design team—in fact, you may be it. As more design hires get brought on, a design culture starts to form organically. The organization will splinter into a matrix: you’ll work closely with your squad, but you may also report to a design manager or designers may report to you. Depending on the work, designers may start working on multiple squads and projects. This is similar to an internal agency model where designers are called in ad-hoc as requests come in through the org. As the design team grows, designers get allocated to their individual squads where they build deeper context and relationships with their teams.

So what does all of this have to do with design culture? The short of it is that design has its own unique perspective on the product. Fostering a design culture is about team-bonding but also translating that culture to the rest of the company.

Designers will establish their own rituals to improve product quality. Sometimes these rituals, such as the design critique or design reviews, may be in opposition to a company that values moving quickly. This is where team cultures may start to clash—the PM demands to get something done now while the design manager is pushing for a better customer experience. Conflict is an inevitable part of collaboration, but how it gets reconciled makes all the difference.

As you’re interviewing different companies, it’s important to see how design shows up:

These are some of the things to watch for as you get a sense of cultures at different places.

In summary, if you’ve done your homework and researched the company, you’ll be able to weed out the companies that have “bad” cultures (toxic environments with high turnover). They are few, but they exist. The most important thing is to find a culture that resonates with your personal values.

Beyond a company’s culture, what kind of team do you like to work with? If the team you join gets disbanded, would you still be interested in working with those people (who might now be in a different company) or do you believe in the mission of the company more?

Usually it’s hard to fully understand culture when you’re interviewing from the outside. Yes, you should still read and familiarize yourself with the company’s mission statement and values, but until you actually work there, you won’t know all the details. One way you can get a better sense of the culture is by interviewing a member of the design team when you’re in the early stages of your application process to see what it’s actually like. And you should definitely set up additional time to talk with the team once you get to an offer.

Designing at a Large Company, Agency, or Startup

In-house (big company or startup) and agency roles offer different advantages. This is a simplified model, but it should give you a rough idea of the work you’d be doing at those types of companies.

You’re reading a preview of an online book. Buy it now for lifetime access to expert knowledge, including future updates.
If you found this post worthwhile, please share!
Related sections
What Does a Product Designer Do?
Don’t Stop at Design Events
Behavioral Design Interviews
Managing the Whiteboard Space