The nature of work is shifting significantly in the early 21st century—from traditional, corporate structures where every employee commutes to a nearby office for eight hours a day, to gig economy models and a deconstruction of what the “workplace” means. While checking into a physical office every day is still the norm, remote work—working outside the office (primarily from home)—has been steadily on the rise in the U.S., with over 50% of U.S. companies supporting some form of remote work,* and at least 5% of the population working from home consistently.*

Figure: The Rise of Remote Work in the United States 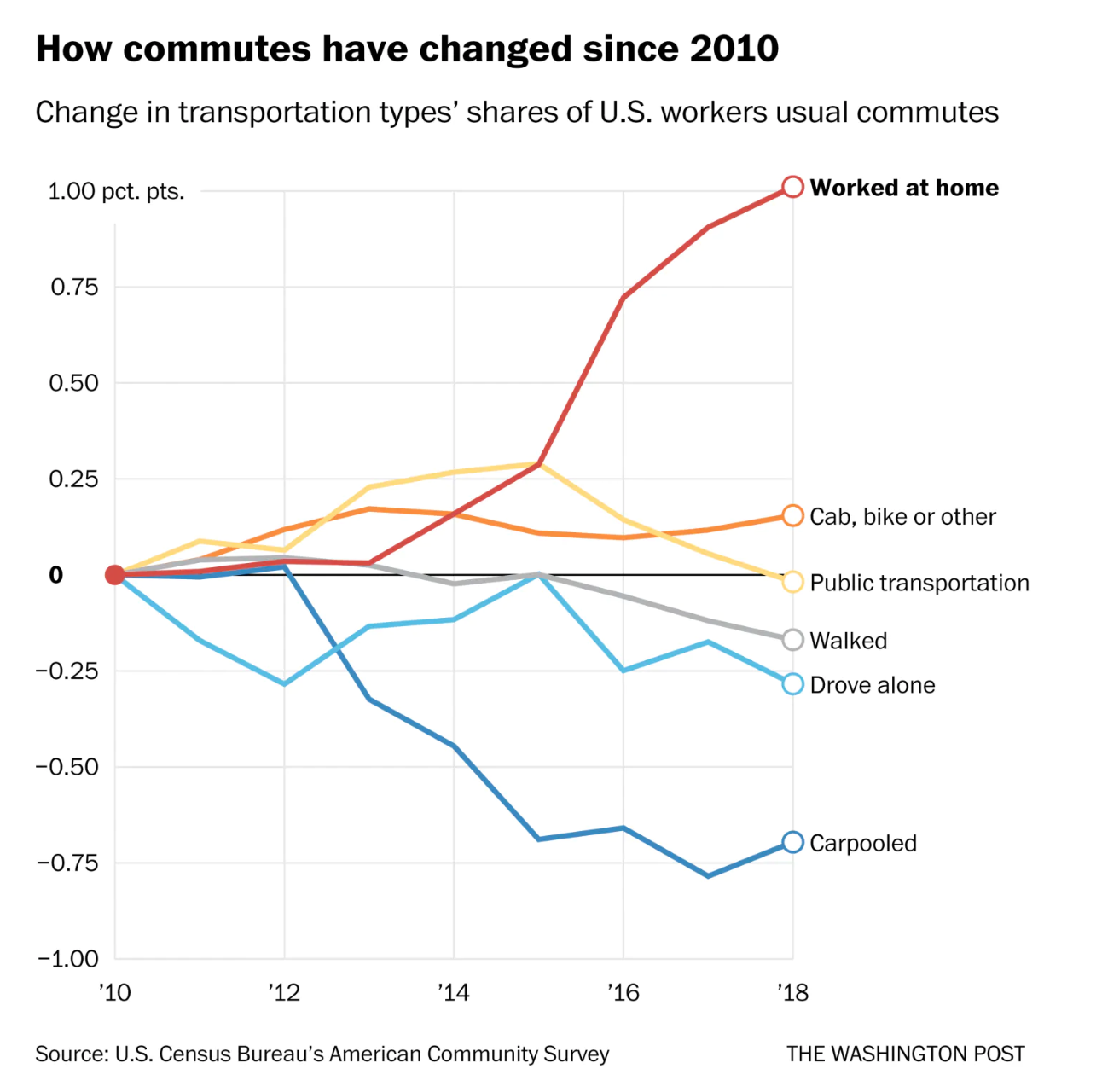 A variety of factors have contributed to this shift, including:

Figure: Remote Work Is Increasing in the U.S. 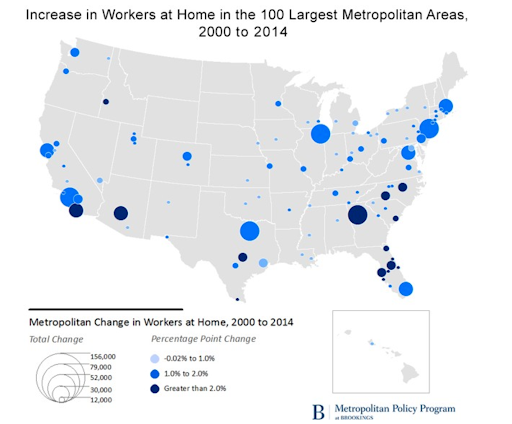 Depending on whom you ask, remote or distributed work is The Future of Work—the biggest shift in the workplace since the industrial revolution; a trend that’s not going to last; or a phenomenon that’s been growing for decades. We embrace the latter view, noting that remote work as we know it now began back in the U.S. in the 1970s (when it was initially referred to as “telecommuting”), and has been on the rise in terms of popularity and reach slowly ever since.*

In 1973, NASA engineer Jack Nilles wrote The Telecommunications-Transportation Tradeoff,* in which he posited that telecommuting was a way to reduce gridlock, sprawl, and reliance on fossil fuels (this was the era of OPEC oil embargoes). He saw a not-so-distant future in which “either the jobs of the employees must be redesigned so that they can still be self-contained at each individual location, or a sufficiently sophisticated telecommunications and information storage system must be developed to allow the information transfer to occur as effectively as if the employees were centrally collocated.”*

A big part of the rise of remote work is tied to technological advancements over the past decade or so. When Hiten Shah notes that remote work is “just work,” he also adds that it’s because “software is everywhere.” But while technology has greatly aided the expansion of remote work, it’s not why remote work will succeed (or fail) at any given organization. Nilles saw this truth early as well: “organizational—and management—cultural changes [are] far more important in the rate of acceptance of telecommuting.”

Remote Work Isn’t Feasible For Everyone

​important​Not every job can be done remotely. Outside of physical jobs like healthcare work, construction, and service industries, every company may have a range of what’s feasible and some specific constraints. A hardware startup might have a mix of roles that can be done remotely, but the core product has to be built and tested in a physical space. Some industries (financial services, healthcare tech) have such significant security and compliance constraints that a remote workforce might be too much effort or risk to maintain.

Laurel Farrer, CEO of Distribute Consulting, assesses whether a job can be done remotely based on the following set of criteria:*

Even within knowledge work, some roles may have heavier in-person needs at various times, such as sales, where closing a deal (especially a big one) likely means getting on a plane and meeting face-to-face. More junior roles that require much higher levels of mentoring and hands-on learning can also be challenging in a remote environment.

Finally, remote work can prove challenging for anyone who thrives on the built-in social and collaborative aspects of working in an office with other people. While many of the necessary skills for remote workers—increased autonomy, adjusted communication practices, managing potential feelings of isolation and loneliness—can be acquired and improved by individuals, and enabled by companies and managers, remote work is not for everyone.

Successful remote work requires intentionally examining how and why people communicate, make decisions, collaborate, and learn to trust each other. Being together in the same space makes up for a lot of messy, inefficient human tendencies, all of which are critical to examine and account for when you won’t be together. It has little to do with which new whiteboarding SaaS app your company tries out or how many channels you have in Slack.