On the other side of the Valley, almost immediately opposite the Bridal Veil, there is another fine fall, considerably wider than the Veil when the snow is melting fast and more than 1000 feet in height, measured from the brow of the cliff where it first springs out into the air to the head of the rocky talus on which it strikes and is broken up into ragged cascades. It is called the Ribbon Fall or Virgin’s Tears. During the spring floods it is a magnificent object, but the suffocating blasts of spray that fill the recess in the wall which it occupies prevent a near approach. In autumn, however when its feeble current falls in a shower, it may then pass for tears with the sentimental onlooker fresh from a visit to the Bridal Veil.

Just beyond this glorious flood the El Capitan Rock, regarded by many as the most sublime feature of the Valley, is seen through the pine groves, standing forward beyond the general line of the wall in most imposing grandeur, a type of permanence. It is 3300 feet high, a plain, severely simple, glacier-sculptured face of granite, the end of one of the most compact and enduring of the mountain ridges, unrivaled in height and breadth and flawless strength.

Across the Valley from here, next to the Bridal Veil, are the picturesque Cathedral Rocks, nearly 2700 feet high, making a noble display of fine yet massive sculpture. They are closely related to El Capitan, having been eroded from the same mountain ridge by the great Yosemite Glacier when the Valley was in process of formation.

Next to the Cathedral Rocks on the south side towers the Sentinel Rock to a height of more than 3000 feet, a telling monument of the glacial period. 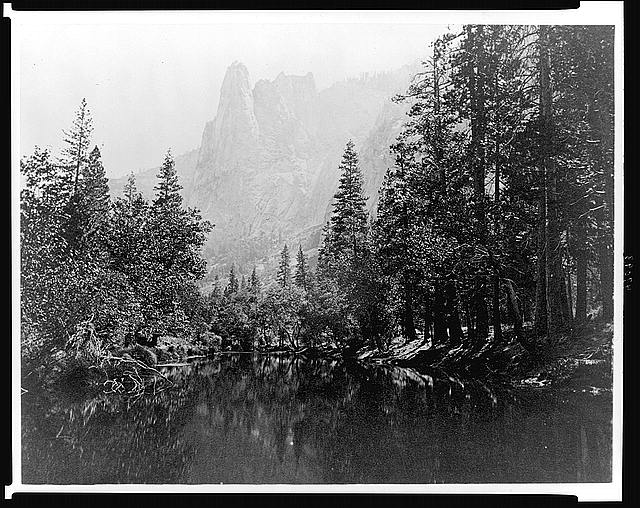 Almost immediately opposite the Sentinel are the Three Brothers, an immense mountain mass with three gables fronting the Valley, one above another, the topmost gable nearly 4000 feet high. They were named for three brothers, sons of old Tenaya, the Yosemite chief, captured here during the Indian War, at the time of the discovery of the Valley in 1852. 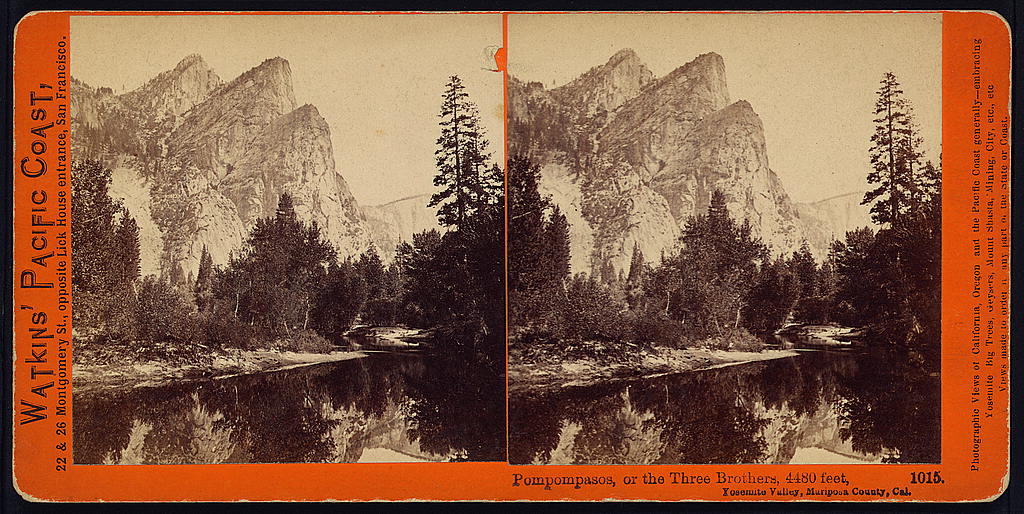 Carleton E. Watkins, Pompompasos, or the Three Brothers, 4480 feet, Yosemite Valley, Library of Congress, between 1870 and 1880

Sauntering up the Valley through meadow and grove, in the company of these majestic rocks, which seem to follow us as we advance, gazing, admiring, looking for new wonders ahead where all about us is so wonderful, the thunder of the Yosemite Fall is heard, and when we arrive in front of the Sentinel Rock it is revealed in all its glory from base to summit, half a mile in height, and seeming to spring out into the Valley sunshine direct from the sky. But even this fall, perhaps the most wonderful of its kind in the world, cannot at first hold our attention, for now the wide upper portion of the Valley is displayed to view, with the finely modeled North Dome, the Royal Arches and Washington Column on our left; Glacier Point, with its massive, magnificent sculpture on the right; and in the middle, directly in front, looms Tissiack or Half Dome, the most beautiful and most sublime of all the wonderful Yosemite rocks, rising in serene majesty from flowery groves and meadows to a height of 4750 feet.

Here the Valley divides into three branches, the Tenaya, Nevada, and Illilouette Cañons, extending back into the fountains of the High Sierra, with scenery every way worthy the relation they bear to Yosemite.

In the south branch, a mile or two from the main Valley, is the Illilouette Fall, 600 feet high, one of the most beautiful of all the Yosemite choir, but to most people inaccessible as yet on account of its rough, steep, boulder-choked cañon. Its principal fountains of ice and snow lie in the beautiful and interesting mountains of the Merced group, while its broad open basin between its fountain mountains and cañon is noted for the beauty of its lakes and forests and magnificent moraines.

Returning to the Valley, and going up the north branch of Tenaya Cañon, we pass between the North Dome and Half Dome, and in less than an hour come to Mirror Lake, the Dome Cascade and Tenaya Fall. Beyond the Fall, on the north side of the cañon is the sublime Ed Capitan-like rock called Mount Watkins; on the south the vast granite wave of Clouds’ Rest, a mile in height; and between them the fine Tenaya Cascade with silvery plumes outspread on smooth glacier-polished folds of granite, making a vertical descent in all of about 700 feet.

You’re reading a preview of an online book. Buy it now for lifetime access to expert knowledge, including future updates.
If you found this post worthwhile, please share!
Related sections
The Incomparable Yosemite
The Flowers
One-Day Excursions No. 2
Two-Day Excursions No. 1