The Beauty of the Rainbows 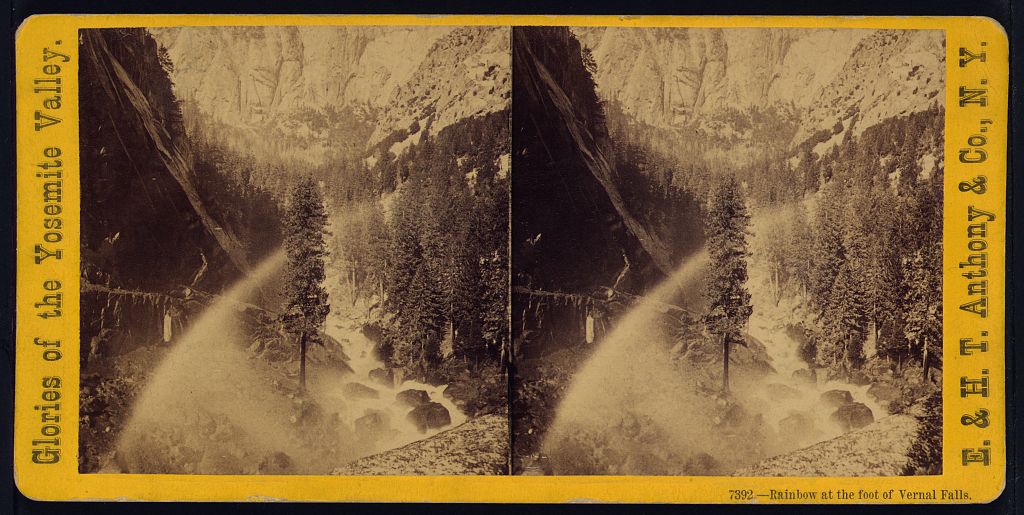 The Bridal Veil and Vernal Falls are famous for their rainbows; and special visits to them are often made when the sun shines into the spray at the most favorable angle. But amid the spray and foam and fine-ground mist ever rising from the various falls and cataracts there is an affluence and variety of iris bows scarcely known to visitors who stay only a day or two. Both day and night, winter and summer, this divine light may be seen wherever water is falling dancing, singing; telling the heart-peace of Nature amid the wildest displays of her power. In the bright spring mornings the black-walled recess at the foot of the Lower Yosemite Fall is lavishly fine with irised spray; and not simply does this span the dashing foam, but the foam itself, the whole mass of it, beheld at a certain distance, seems to be colored, and drips and wavers from color to color, mingling with the foliage of the adjacent trees, without suggesting any relationship to the ordinary rainbow. This is perhaps the largest and most reservoir-like fountain of iris colors to be found in the Valley.

Lunar rainbows or spray-bows also abound in the glorious affluence of dashing, rejoicing, hurrahing, enthusiastic spring floods, their colors as distinct as those of the sun and regularly and obviously banded, though less vivid. Fine specimens may be found any night at the foot of the Upper Yosemite Fall, glowing gloriously amid the gloomy shadows and thundering waters, whenever there is plenty of moonlight and spray. Even the secondary bow is at times distinctly visible.

The best point from which to observe them is on Fern Ledge. For some time after moonrise, at time of high water, the arc has a span of about five hundred feet, and is set upright; one end planted in the boiling spray at the bottom, the other in the edge of the fall, creeping lower, of course, and becoming less upright as the moon rises higher. This grand arc of color, glowing in mild, shapely beauty in so weird and huge a chamber of night shadows, and amid the rush and roar and tumultuous dashing of this thunder-voiced fall, is one of the most impressive and most cheering of all the blessed mountain evangels.

Smaller bows may be seen in the gorge on the plateau between the Upper and Lower Falls. Once toward midnight, after spending a few hours with the wild beauty of the Upper Fall, I sauntered along the edge of the gorge, looking in here and there, wherever the footing felt safe, to see what I could learn of the night aspects of the smaller falls that dwell there. And down in an exceedingly black, pit-like portion of the gorge, at the foot of the highest of the intermediate falls, into which the moonbeams were pouring through a narrow opening, I saw a well-defined spray-bow, beautifully distinct in colors, spanning the pit from side to side, while pure white foam-waves beneath the beautiful bow were constantly springing up out of the dark into the moonlight like dancing ghosts.

A wild scene, but not a safe one, is made by the moon as it appears through the edge of the Yosemite Fall when one is behind it. Once, after enjoying the night-song of the waters and watching the formation of the colored bow as the moon came round the domes and sent her beams into the wild uproar, I ventured out on the narrow bench that extends back of the fall from Fern Ledge and began to admire the dim-veiled grandeur of the view. I could see the fine gauzy threads of the fall’s filmy border by having the light in front; and wishing to look at the moon through the meshes of some of the denser portions of the fall, I ventured to creep farther behind it while it was gently wind-swayed, without taking sufficient thought about the consequences of its swaying back to its natural position after the wind-pressure should be removed. The effect was enchanting: fine, savage music sounding above, beneath, around me; while the moon, apparently in the very midst of the rushing waters, seemed to be struggling to keep her place, on account of the ever-varying form and density of the water masses through which she was seen, now darkly veiled or eclipsed by a rush of thick-headed comets, now flashing out through openings between their tails. I was in fairyland between the dark wall and the wild throng of illumined waters, but suffered sudden disenchantment; for, like the witch-scene in Alloway Kirk, “in an instant all was dark.” Down came a dash of spent comets, thin and harmless-looking in the distance, but they felt desperately solid and stony when they struck my shoulders, like a mixture of choking spray and gravel and big hailstones. Instinctively dropping on my knees, I gripped an angle of the rock, curled up like a young fern frond with my face pressed against my breast, and in this attitude submitted as best I could to my thundering bath. The heavier masses seemed to strike like cobblestones, and there was a confused noise of many waters about my ears—hissing, gurgling, clashing sounds that were not heard as music. The situation was quickly realized. How fast one’s thoughts burn in such times of stress! I was weighing chances of escape. Would the column be swayed a few inches away from the wall, or would it come yet closer? The fall was in flood and not so lightly would its ponderous mass be swayed. My fate seemed to depend on a breath of the “idle wind.” It was moved gently forward, the pounding ceased, and I was once more visited by glimpses of the moon. But fearing I might be caught at a disadvantage in making too hasty a retreat, I moved only a few feet along the bench to where a block of ice lay. I wedged myself between the ice and the wall and lay face downwards, until the steadiness of the light gave encouragement to rise and get away. Somewhat nerve-shaken, drenched, and benumbed, I made out to build a fire, warmed myself, ran home, reached my cabin before daylight, got an hour or two of sleep, and awoke sound and comfortable, better, not worse for my hard midnight bath.

If you found this post worthwhile, please share!
Related sections
A Wonderful Ascent
The Big Trees
The Birds
Galen Clark