With the exception of a few spires and pinnacles, the South Dome is the only rock about the Valley that is strictly inaccessible without artificial means, and its inaccessibility is expressed in severe terms. Nevertheless many a mountaineer, gazing admiringly, tried hard to invent a way to the top of its noble crown—all in vain, until in the year 1875, George Anderson, an indomitable Scotchman, undertook the adventure. The side facing Tenaya Cañon is an absolutely vertical precipice from the summit to a depth of about 1600 feet, and on the opposite side it is nearly vertical for about as great a depth. The southwest side presents a very steep and finely drawn curve from the top down a thousand feet or more, while on the northeast, where it is united with the Clouds’ Rest Ridge, one may easily reach a point called the Saddle, about seven hundred feet below the summit. From the Saddle the Dome rises in a graceful curve a few degrees too steep for unaided climbing, besides being defended by overleaning ends of the concentric dome layers of the granite.

A year or two before Anderson gained the summit, John Conway, the master trail-builder of the Valley, and his little sons, who climbed smooth rocks like lizards, made a bold effort to reach the top by climbing barefooted up the grand curve with a rope which they fastened at irregular intervals by means of eye-bolts driven into joints of the rock. But finding that the upper part would require laborious drilling, they abandoned the attempt, glad to escape from the dangerous position they had reached, some 300 feet above the Saddle. Anderson began with Conway’s old rope, which had been left in place, and resolutely drilled his way to the top, inserting eye-bolts five to six feet apart, and making his rope fast to each in succession, resting his feet on the last bolt while he drilled a hole for the next above. Occasionally some irregularity in the curve, or slight foothold, would enable him to climb a few feet without a rope, which he would pass and begin drilling again, and thus the whole work was accomplished in a few days. From this slender beginning he proposed to construct a substantial stairway which he hoped to complete in time for the next year’s travel, but while busy getting out timber for his stairway and dreaming of the wealth he hoped to gain from tolls, he was taken sick and died all alone in his little cabin.

On the 10th of November, after returning from a visit to Mount Shasta, a month or two after Anderson had gained the summit, I made haste to the Dome, not only for the pleasure of climbing, but to see what I might learn. The first winter storm-clouds had blossomed and the mountains and all the high points about the Valley were mantled in fresh snow. I was, therefore, a little apprehensive of danger from the slipperiness of the rope and the rock. Anderson himself tried to prevent me from making the attempt, refusing to believe that any one could climb his rope in the now-muffled condition in which it then was. Moreover, the sky was overcast and solemn snow-clouds began to curl around the summit, and my late experiences on icy Shasta came to mind. But reflecting that I had matches in my pocket, and that a little firewood might be found, I concluded that in case of a storm the night could be spent on the Dome without suffering anything worth minding, no matter what the clouds might bring forth. I therefore pushed on and gained the top.

It was one of those brooding, changeful days that come between Indian summer and winter, when the leaf colors have grown dim and the clouds come and go among the cliffs like living creatures looking for work: now hovering aloft, now caressing rugged rock-brows with great gentleness, or, wandering afar over the tops of the forests, touching the spires of fir and pine with their soft silken fringes as if trying to tell the glad news of the coming of snow.

The first view was perfectly glorious. A massive cloud of pure pearl luster, apparently as fixed and calm as the meadows and groves in the shadow beneath it, was arched across the Valley from wall to wall, one end resting on the grand abutment of El Capitan, the other on Cathedral Rock. A little later, as I stood on the tremendous verge overlooking Mirror Lake, a flock of smaller clouds, white as snow, came from the north, trailing their downy skirts over the dark forests, and entered the Valley with solemn god-like gestures through Indian Cañon and over the North Dome and Royal Arches, moving swiftly, yet with majestic deliberation. On they came, nearer and nearer, gathering and massing beneath my feet and filling the Tenaya Cañon. Then the sun shone free, lighting the pearly gray surface of the cloud-like sea and making it glow. Gazing, admiring, I was startled to see for the first time the rare optical phenomenon of the “Specter of the Brocken.” My shadow, clearly outlined, about half a mile long, lay upon this glorious white surface with startling effect. I walked back and forth, waved my arms and struck all sorts of attitudes, to see every slightest movement enormously exaggerated. Considering that I have looked down so many times from mountain tops on seas of all sorts of clouds, it seems strange that I should have seen the “Brocken Specter” only this once. A grander surface and a grander stand-point, however, could hardly have been found in all the Sierra.

After this grand show the cloud-sea rose higher, wreathing the Dome, and for a short time submerging it, making darkness like night, and I began to think of looking for a camp ground in a cluster of dwarf pines. But soon the sun shone free again, the clouds, sinking lower and lower, gradually vanished, leaving the Valley with its Indian-summer colors apparently refreshed, while to the eastward the summit-peaks, clad in new snow, towered along the horizon in glorious array.

Though apparently it is perfectly bald, there are four clumps of pines growing on the summit, representing three species, Pinus albicaulis, P. contorta and P. ponderosa, var. Jeffreyi—all three, of course, repressed and storm-beaten. The alpine spiræa grows here also and blossoms profusely with potentilla, erigeron, eriogonum, pentstemon, solidago, and an interesting species of onion, and four or five species of grasses and sedges. None of these differs in any respect from those of other summits of the same height, excepting the curious little narrow-leaved, waxen-bulbed onion, which I had not seen elsewhere.

Notwithstanding the enthusiastic eagerness of tourists to reach the crown of the Dome the views of the Valley from this lofty standpoint are less striking than from many other points comparatively low, chiefly on account of the foreshortening effect produced by looking down from so great a height. The North Dome is dwarfed almost beyond recognition, the grand sculpture of the Royal Arches is scarcely noticeable, and the whole range of walls on both sides seem comparatively low, especially when the Valley is flooded with noon sunshine; while the Dome itself, the most sublime feature of all the Yosemite views, is out of sight beneath one’s feet. The view of Little Yosemite Valley is very fine, though inferior to one obtained from the base of the Starr King Cone, but the summit landscapes towards Mounts Ritter, Lyell, Dana, Conness, and the Merced Group, are very effective and complete.

No one has attempted to carry out Anderson’s plan of making the Dome accessible. For my part I should prefer leaving it in pure wildness, though, after all, no great damage could be done by tramping over it. The surface would be strewn with tin cans and bottles, but the winter gales would blow the rubbish away. Avalanches might strip off any sort of stairway or ladder that might be built. Blue jays and Clark’s crows have trodden the Dome for many a day, and so have beetles and chipmunks, and Tissiack would hardly be more “conquered” or spoiled should man be added to her list of visitors. His louder scream and heavier scrambling would not stir a line of her countenance.

When the sublime ice-floods of the glacial period poured down the flank of the Range over what is now Yosemite Valley, they were compelled to break through a dam of domes extending across from Mount Starr King to North Dome; and as the period began to draw near a close the shallowing ice-currents were divided and the South Dome was, perhaps, the first to emerge, burnished and shining like a mirror above the surface of the icy sea; and though it has sustained the wear and tear of the elements tens of thousands of years, it yet remains a telling monument of the action of the great glaciers that brought it to light. Its entire surface is still covered with glacial hieroglyphics whose interpretation is the reward of all who devoutly study them.

The Ancient Yosemite Glaciers: How the Valley Was Formed 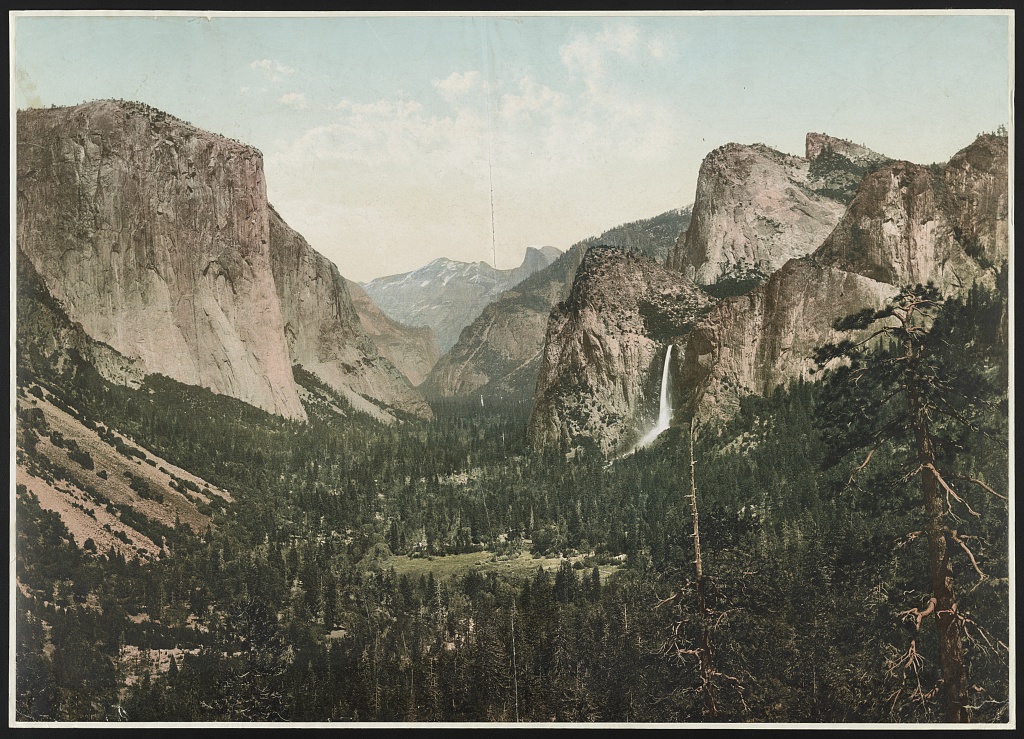 All California has been glaciated, the low plains and valleys as well as the mountains. Traces of an ice-sheet, thousands of feet in thickness, beneath whose heavy folds the present landscapes have been molded, may be found everywhere, though glaciers now exist only among the peaks of the High Sierra. No other mountain chain on this or any other of the continents that I have seen is so rich as the Sierra in bold, striking, well-preserved glacial monuments. Indeed, every feature is more or less tellingly glacial. Not a peak, ridge, dome, cañon, yosemite, lake-basin, stream or forest will you see that does not in some way explain the past existence and modes of action of flowing, grinding, sculpturing, soil-making, scenery-making ice. For, notwithstanding the post-glacial agents—the air, rain, snow, frost, river, avalanche, etc.—have been at work upon the greater portion of the Range for tens of thousands of stormy years, each engraving its own characters more and more deeply over those of the ice, the latter are so enduring and so heavily emphasized, they still rise in sublime relief, clear and legible, through every after-inscription. The landscapes of North Greenland, Antarctica, and some of those of our own Alaska, are still being fashioned beneath a slow-crawling mantle of ice, from a quarter of a mile to probably more than a mile in thickness, presenting noble illustrations of the ancient condition of California, when its sublime scenery lay hidden in process of formation. On the Himalaya, the mountains of Norway and Switzerland, the Caucasus, and on most of those of Alaska, their ice-mantle has been melted down into separate glaciers that flow river-like through the valleys, illustrating a similar past condition in the Sierra, when every cañon and valley was the channel of an ice-stream, all of which may be easily traced back to their fountains, where some sixty-five or seventy of their topmost residual branches still linger beneath protecting mountain shadows.