The tech industry is increasingly powering businesses around the globe, and creating products that dramatically impact people’s lives. And yet, it is an industry that does not reflect the broader population. Women make up 57% of the U.S. workforce as a whole but only 26% of the technical workforce. Black, Latina, and Native American women make up 16% of the U.S. workforce and hold only 4% of tech jobs.* Pay gaps by gender and race persist. While 83% of tech executives are white, only 10% are women.** Asian and Asian American men make up 32% of the tech workforce, but only 20% hold executive positions; while Asian and Asian American women make up 15% of the workforce, they hold only 5% of executive roles in tech.

The problem, however, goes beyond race and gender, and is more pervasive than the statistics presented by Information is Beautiful. Data on race and gender are the easiest to collect, but harassment and discrimination affect workers based on their caregiver status, immigration status, gender identity, sexual orientation, and disability status. 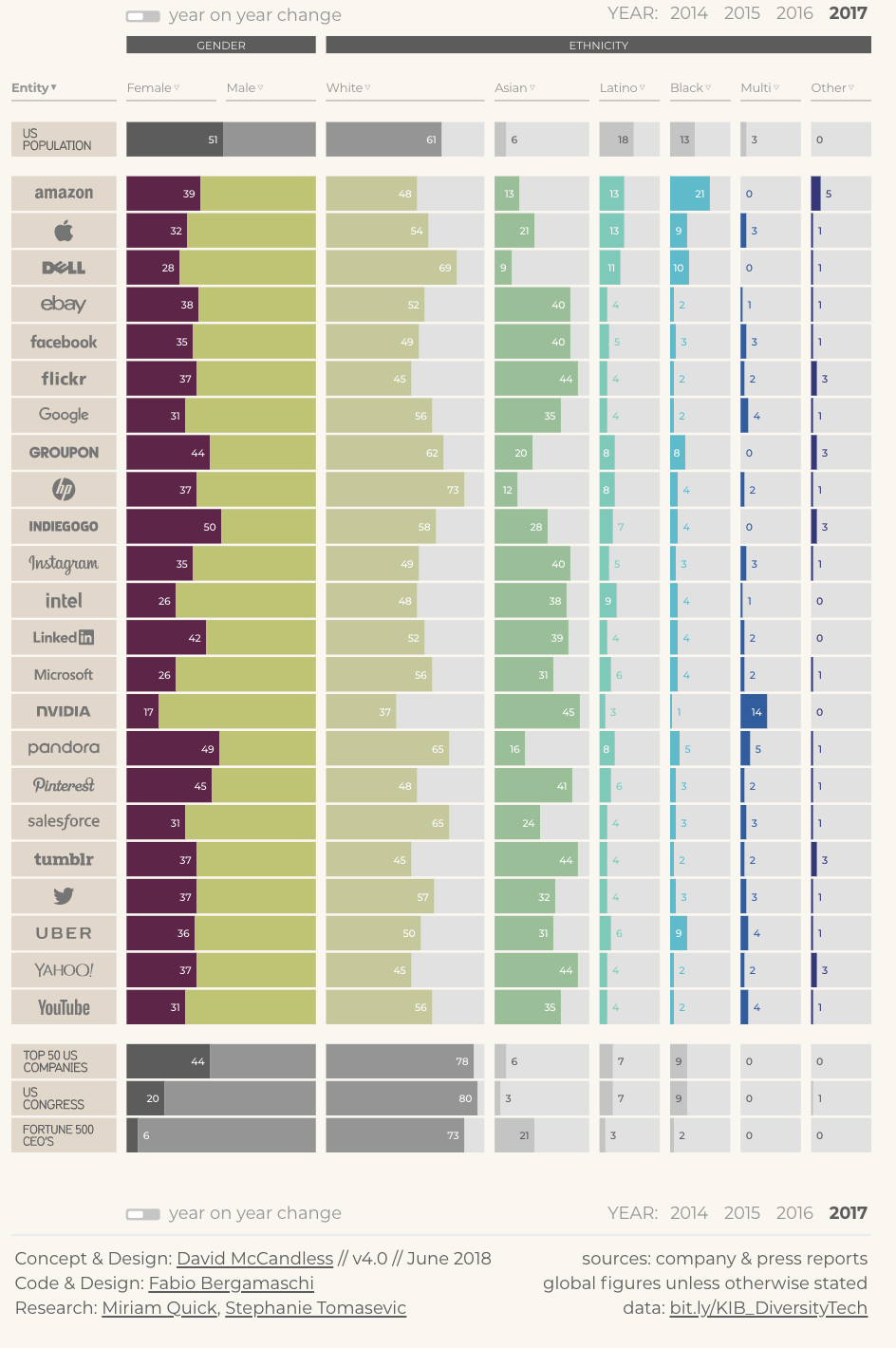 The Role of Bias

The above statistics speak to a much deeper history of systemic bias and discrimination toward people from all these underrepresented groups.

​Definition​ A bias is an inclination in favor of or against a particular person or group based on factors such as race, ethnicity, age, educational prestige, appearance, and so on. As a type of observational error, bias leads to unfair and ineffective outcomes when it affects decision-making. Bias can operate systematically where an individual’s decision-making is persistently affected or on a systemic basis where a process or group dynamic produces biased decisions. Explicit biases (or conscious biases) are inclinations about particular people or groups that an individual has and is aware of. Implicit biases (or unconscious biases) are inclinations based on subconscious associations that influence our decisions without us being aware of them.*

Biases are a kind of mental shortcut; rather than treating everyone as a complex individual, we pick factors by which to group them and assign that group certain expectations, with no evidence that those expectations are borne out in individual behavior. Implicit or unconscious biases are especially difficult to deal with because we don’t know that we have them, and they may even contradict the views we consciously hold. For example, a group of physicians may not consciously believe that Black patients feel less pain than white patients, but nevertheless recommend less pain medication for their Black patients experiencing the same injury as their white patients.*

There are many types of unconscious bias that affect people in general, and thus also affect hiring processes. Harvard developed a free online tool called the Implicit Association Test (IAT) to help people become more aware of their unconscious biases.

But there are plenty of conscious biases as well. For example, an overreliance on traditional academic pedigrees when screening for candidates vastly favors people who could afford a costly education and had access to resources and networks as a young person. We cover more biases throughout this section to help raise awareness and to provide practical suggestions on how to discuss and combat them in your organization.

Systemic bias and discrimination are a broad problem that affects not just recruiting and hiring, but also people’s willingness to remain in a given industry that does not represent them or treat them fairly. The Kapor Center’s landmark Tech Leavers Study reported in 2017 that nearly 40% of people who left the tech industry cited “unfairness or mistreatment” as the major reason they left, with men of color the most likely to leave due to mistreatment; 78% reported having experienced unfair treatment. In 2016, the departure rate for women was 41%—more than twice that of men, which was 17%.*

Underrepresented men and women of color experience stereotyping at twice the rate of their white and Asian peers, while LGBTQ+ tech leavers report bullying and public humiliation at significantly higher rates than other underrepresented groups. However, 62% of tech leavers said they would have stayed had their employer made efforts to create a more inclusive work environment.

Along with the negative consequences for candidates and employees, homogeneous and inequitable, unfair work environments also pose significant risks to organizations.* The Tech Leavers Study concluded that the industry stands to lose more than $16B per year in employee replacement costs.* Companies also may face backlash and negative brand associations for not dealing with potentially harmful features and unforeseen consequences of their products.*** For example, Facebook’s “real name” policy—which failed to realize the importance of privacy concerns of people from marginalized groups—was so controversial there’s an extensive Wikipedia page about it. When Twitter was in the running for acquisition, a number of potential buyers apparently balked at the company’s inability to deal with the harassment issues on its platform.

I observed a company of mostly white, affluent iPhone users delay shipping on Android because Android users reportedly earn less money, and later regretting the choice after discovering their Android users are more engaged. I’ve watched helplessly as another company used the data they collected on users in discriminatory ways, which not only erodes users’ trust but also the trust of the employees who have been subject to discrimination in their lives. If these teams were more diverse, especially among the leadership, I doubt the same choices would have been made.Leighton Wallace, engineering manager, Lever*

A dearth of diversity doesn’t just limit the number of innovative products companies can produce and the markets they can reach—it also poses serious risks to underrepresented populations. In 2015, Google was called out for racist image search results, a problem it has not solved. A recent study from the University of Georgia found that the technology used by self-driving cars may detect dark-skinned pedestrians less effectively than light-skinned ones. As Vox reports, this kind of “algorithmic bias” results from many factors, including sources of training data and homogenous technical research and product development teams. This has implications both for the kinds of tools and products we use as consumers and for the work environment of the people at those companies, as much as it impacts those companies’ ability to innovate and drive change.

Anyone who owns a company or runs a hiring process has the power to help bridge the opportunity gap that has been created through years of institutional discrimination of marginalized groups. There are also countless advantages—to your company, to candidates, to your industry, and to your customers—to embracing and supporting diversity. The rules of business-building have changed. Building a technical product today requires enormous adaptability, creativity, and global reach—all of which improves with diversity.

Research extensively and consistently bears out that diversity positively correlates to better financial performance.* McKinsey has conducted some of the most robust, oft-cited studies on a direct correlation of diversity and better business outcomes. Among their findings: “Gender-diverse companies are 21% more likely to have better financial performance. Ethnically diverse companies are 33% more likely to financially outperform their counterparts.” A 2013 report by Harvard Business Review found that companies that had more diverse workforces were “45% likelier to report a growth in market share over the previous year and 70% likelier to report that the firm captured a new market.”* Researchers also found that more diverse companies announced, on average, two more products a year.*

In addition to correlational studies, diversity seems to have a causal relationship with innovation. Numerous psychology studies have shown that diverse teams shine a light on organizational blindspots, solve problems faster, and are more creative.** Diverse teams have the ability to see and solve problems that might otherwise be missed or mysterious, and increase returns for the business by doing so. In early 2019, Pinterest released a widely applauded inclusive search feature. Development was driven in large part by feedback from employees and diverse members of their customer base who were looking for beauty tips for a wide range of skin tones. When it comes to the business argument, the research is conclusive: diverse teams are more productive and effective at making decisions,* and diversity is markedly better for a company’s bottom line.

Finally, as a recruiter or hiring manager, expanding your hiring pool gives you an advantage in an increasingly competitive market. When you’re no longer competing with Google and Facebook for the same set of people, you have the opportunity to find more candidates in general, adding volume along with diversity to the top of your hiring funnel.

Whatever your role in recruiting and hiring, diversity and inclusion present a complex, multifaceted challenge. The goal of this section is to provide enough background and perspective that you understand the issues, can have thoughtful conversations with anyone else involved, and can make an impact on your company’s hiring processes. This is a difficult and nuanced subject to tackle, so we’ll start with the basics (what is D&I?), and then move on to cover many of the myths and pitfalls you may encounter along the way. Finally, we provide practical tactics you can implement at your organization to improve the hiring process for everyone involved.

​contribute​ Coverage of D&I is always changing. Questions and suggestions will help us improve this section and keep it up to date.

Diversity is being invited to the party; inclusion is being asked to dance.Vernā Myers, VP Inclusion Strategy, Netflix*

Diversity and Inclusion (or D&I) is an approach taken by organizations to building diverse teams and promoting an inclusive workplace, in order to set underrepresented groups up for success. Diversity, Equity, and Inclusion (DEI), Diversity & Belonging, and other variations are also common.

Understanding the differences between diversity and inclusion is essential, because both are necessary to building and fostering a workplace where all employees can thrive. As noted earlier, diverse teams perform better and contribute to longer-lasting, more successful companies. But having a demographically diverse team does not automatically lead to these benefits. It’s not possible to reap the benefits of diversity without inclusive practices.

You’re reading a preview of an online book. Buy it now for lifetime access to expert knowledge, including future updates.
If you found this post worthwhile, please share!
Related sections
“We don’t want to lower the hiring bar.”
Referrals
Marketplaces and Platforms
Technical Question Pitfalls