The Trouble with Resumes

While hiring teams often view resumes as the primary means of making top-of-funnel decisions, filtering candidates by their resumes is noisy, biased, and inefficient. Although little academic research exists on the predictive use of resumes in software engineering hiring specifically, research has been done on the function of resumes across all industries. An 85-year meta-analysis found that resumes (along with other traditional assessment methods like interviews) are very poor predictors of subsequent job performance.

Engineering managers tend to harbor the suspicion that engineers are better at reading technical resumes than recruiters: “We’re domain experts! We don’t need to rely on proxies and can actually tell what the candidate can do!” But even the most experienced, qualified engineers aren’t always on the same page when it comes to what makes a good technical hire. In fact, the more experience you gain, the higher the risk that you may be stuck in your own way of seeing things. This makes the static data of a resume a particularly poor alignment tool.

On average, participants correctly guessed which candidates were strong* 53% of the time, and there was no statistically significant difference between engineers and recruiters. Moreover, and even more importantly, people’s errors weren’t consistent. In other words, everyone disagreed about what a good candidate looked like in the first place.* 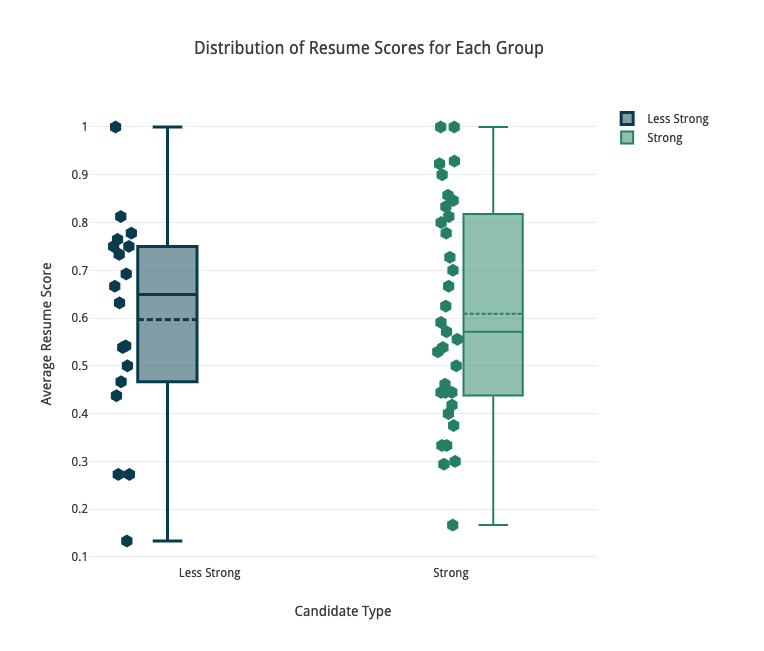 Academic and industry research has consistently proven that bias is a common problem in resume filtering as well. In a 2003 study on resumes by the National Bureau of Economic Research, experimenters submitted identical resumes to a series of help-wanted ads in the Boston and Chicago areas where the only difference between resumes was candidate name; some names were thought of as traditionally white and others as traditionally Black. Resumes belonging to candidates with “white-sounding” names received 50% more callbacks. These results were repeated in a 2016 study at Harvard Business School, targeting 16 metropolitan areas and including traditionally Asian names. Another study showed bias along class and gender lines in law firms.

​candidate​ As a candidate, you will increase your chances of being judged by your strongest attributes by doing everything in your power not to be filtered by your resume alone. If you have a resume with no name-brand schools or companies, the reality is that you’ll face stiff odds at companies with many applicants who do. And even if you have a degree from an elite university and employment with a top company, you’ll still have more luck advancing through the hiring process at any company if you can get into the funnel later, via a warm introduction, referral, or any other connection you can find. A few things to consider when building a resume:

Online challenges (or coding challenges) are tests that a company sends to prospective candidates in order to screen them for specific criteria early in the hiring process, usually before phone screens or more in-depth interviews. Online challenges typically involve a small set of predetermined programming problems. Either the company or a third-party company will have created them, and the hiring team will expect candidates to complete them in a specified amount of time and without any assistance.

Companies can learn a lot about candidates by giving them a homework assignment in which they have to write code to solve a problem. These technical screens are almost always scored automatically—once the candidate writes and submits code, the assessment system runs it against a bunch of tests to verify that the code outputs are correct and that the code runs efficiently.

You’re reading a preview of an online book. Buy it now for lifetime access to expert knowledge, including future updates.
If you found this post worthwhile, please share!
Related sections
The Consequences
D&I in Hiring
Filtering on Essential Role Requirements
Inbound Applicants