You might also hear someone say, “What about diversity of thought, isn’t that more important than what people look like?” or “Doesn’t my opinion matter anymore?”

It’s hard to look at a definition like that and think “diversity of thought” would be a bad thing. It’s not! Inviting underrepresented people to sit at the table and giving them a microphone brings different viewpoints to an industry that has historically heard only a limited set of ideas in a feedback loop.

It’s important not to conflate ideological diversity with diversity related to the immutable traits that define so much of individuals’ lived experiences. It is also necessary to question the motives of the person who insists that “diversity of thought” has nothing to do with increasing representation in the industry.

‘Diversity of Thought’ should be achieved as a result of diverse representation.Michelle Kim, co-founder and CEO, Awaken*

​caution​ Language doesn’t exist in a vacuum. The phrase “diversity of thought” has a history, and that history is racist and misogynistic.* Of course not everyone who’s ever asked the question is operating within those ideologies, but it may help those confused by the difference to learn a bit about how and why the phrase has been used in disingenuous ways to actively counteract D&I efforts within an organization. A notable tech industry example of the “diversity of thought” argument, in fact, comes from James Damore’s infamous manifesto against diversifying Google.*

​danger​ “Ideological diversity” and “diversity of thought” are often used as dog whistles by individuals who have deliberately co-opted the language of diversity and inclusion, placing extreme conservative ideology on equal footing with systemic oppression based on race, gender, sexual orientation, and so on. They express feeling silenced and oppressed for their particular beliefs, a cousin to the idea of “reverse racism.” In this case, “ideological diversity” is a cover for espousing racist or sexist beliefs.

Without assuming anything about the person using these phrases, but still being aware that they may be operating with anti-D&I sentiments, a useful question to ask is whether or not the ideological diversity argument is being used as a way to diminish or dilute the concerns of URGs.

​important​ But also, it is critical to be clear about where you are drawing the line. Your employees should feel free to express their views and beliefs as long as they are not harming others, and the arbiter of harm is the people being impacted. While this may sound unfair, it is the default for everyone who is not part of a majority group. If there were ever a time to say “when you are accustomed to privilege, equality feels like oppression,”* this would be it. 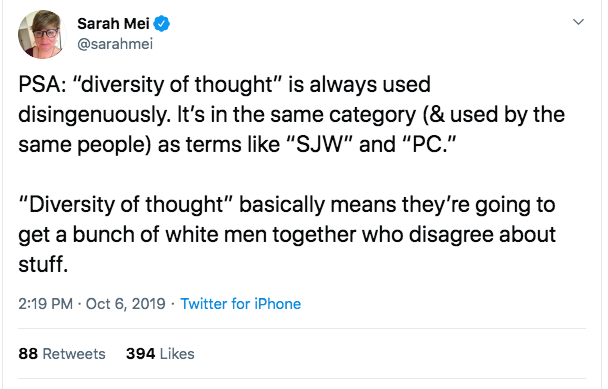 “Is it legal to consider race and gender in hiring?”

In some cases with these kinds of comments, people genuinely want to know what’s allowed and what’s not. But they may also be trying to get around any action the company is proposing, or they might be on the defensive. They may be afraid that their place in the company is at risk.

You’re reading a preview of an online book. Buy it now for lifetime access to expert knowledge, including future updates.
If you found this post worthwhile, please share!
Related sections
Evaluating and Interviewing
Cover Letters
Note-Taking During Interviews
Talking to References