If I were so time-poor as to have only one day to spend in Yosemite I should start at daybreak, say at three o’clock in midsummer, with a pocketful of any sort of dry breakfast stuff, for Glacier Point, Sentinel Dome, the head of Illilouette Fall, Nevada Fall, the top of Liberty Cap, Vernal Fall and the wild boulder-choked River Cañon. The trail leaves the Valley at the base of the Sentinel Rock, and as you slowly saunter from point to point along its many accommodating zigzags nearly all the Valley rocks and falls are seen in striking, ever-changing combinations. At an elevation of about five hundred feet a particularly fine, wide-sweeping view down the Valley is obtained, past the sheer face of the Sentinel and between the Cathedral Rocks and El Capitan. At a height of about 1500 feet the great Half Dome comes full in sight, overshadowing every other feature of the Valley to the eastward. From Glacier Point you look down 3000 feet over the edge of its sheer face to the meadows and groves and innumerable yellow pine spires, with the meandering river sparkling and spangling through the midst of them. Across the Valley a great telling view is presented of the Royal Arches, North Dome, Indian Cañon, Three Brothers and El Capitan, with the dome-paved basin of Yosemite Creek and Mount Hoffman in the background. To the eastward, the Half Dome close beside you looking higher and more wonderful than ever; southeastward the Starr King, girdled with silver firs, and the spacious garden-like basin of the Illilouette and its deeply sculptured fountain-peaks, called “The Merced Group”; and beyond all, marshaled along the eastern horizon, the icy summits on the axis of the Range and broad swaths of forests growing on ancient moraines, while the Nevada, Vernal and Yosemite Falls are not only full in sight but are distinctly heard as if one were standing beside them in their spray. 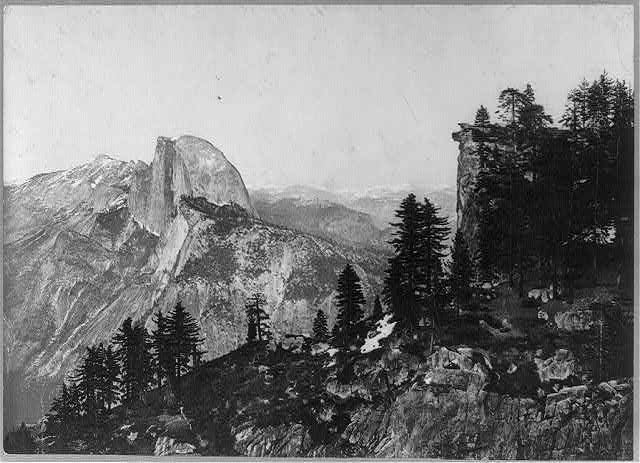 The views from the summit of Sentinel Dome are still more extensive and telling. Eastward the crowds of peaks at the head of the Merced, Tuolumne and San Joaquin Rivers are presented in bewildering array; westward, the vast forests, yellow foothills and the broad San Joaquin plains and the Coast Ranges, hazy and dim in the distance.

From Glacier Point go down the trail into the lower end of the Illilouette basin, cross Illilouette Creek and follow it to the Fall where from an outjutting rock at its head you will get a fine view of its rejoicing waters and wild cañon and the Half Dome. Thence returning to the trail, follow it to the head of the Nevada Fall. Linger here an hour or two, for not only have you glorious views of the wonderful fall, but of its wild, leaping, exulting rapids and, greater than all, the stupendous scenery into the heart of which the white passionate river goes wildly thundering, surpassing everything of its kind in the world. After an unmeasured hour or so of this glory, all your body aglow, nerve currents flashing through you never before felt, go to the top of the Liberty Cap, only a glad saunter now that your legs as well as head and heart are awake and rejoicing with everything. The Liberty Cap, a companion of the Half Dome, is sheer and inaccessible on three of its sides but on the east a gentle, ice-burnished, juniper-dotted slope extends to the summit where other wonderful views are displayed where all are wonderful: the south side and shoulders of Half Dome and Clouds’ Rest, the beautiful Little Yosemite Valley and its many domes, the Starr King cluster of domes, Sentinel Dome, Glacier Point, and, perhaps the most tremendously impressive of all, the views of the hopper-shaped cañon of the river from the head of the Nevada Fall to the head of the Valley.

Returning to the trail you descend between the Nevada Fall and the Liberty Cap with fine side views of both the fall and the rock, pass on through clouds of spray and along the rapids to the head of the Vernal Fall, about a mile below the Nevada. Linger here if night is still distant, for views of this favorite fall and the stupendous rock scenery about it. Then descend a stairway by its side, follow a dim trail through its spray, and a plain one along the border of the boulder-dashed rapids and so back to the wide, tranquil Valley.

Another grand one-day excursion is to the Upper Yosemite Fall, the top of the highest of the Three Brothers, called Eagle Peak on the Geological Survey maps; the brow of El Capitan; the head of the Ribbon Fall; across the beautiful Ribbon Creek Basin; and back to the Valley by the Big Oak Flat wagon-road.

The trail leaves the Valley on the east side of the largest of the earthquake taluses immediately opposite the Sentinel Rock and as it passes within a few rods of the foot of the great fall, magnificent views are obtained as you approach it and pass through its spray, though when the snow is melting fast you will be well drenched. From the foot of the Fall the trail zigzags up a narrow cañon between the fall and a plain mural cliff that is burnished here and there by glacial action.

You should stop a while on a flat iron-fenced rock a little below the head of the fall beside the enthusiastic throng of starry comet-like waters to learn something of their strength, their marvelous variety of forms, and above all, their glorious music, gathered and composed from the snow-storms, hail-, rain- and wind-storms that have fallen on their glacier-sculptured, domey, ridgy basin. Refreshed and exhilarated, you follow your trail-way through silver fir and pine woods to Eagle Peak, where the most comprehensive of all the views to be had on the north-wall heights are displayed. After an hour or two of gazing, dreaming, studying the tremendous topography, etc., trace the rim of the Valley to the grand El Capitan ridge and go down to its brow, where you will gain everlasting impressions of Nature’s steadfastness and power combined with ineffable fineness of beauty.

You’re reading a preview of an online book. Buy it now for lifetime access to expert knowledge, including future updates.
If you found this post worthwhile, please share!
Related sections
General Features of the Valley
Exploring an Ice Cone
The Silver Firs
Lamon