The First View: the Bridal Veil 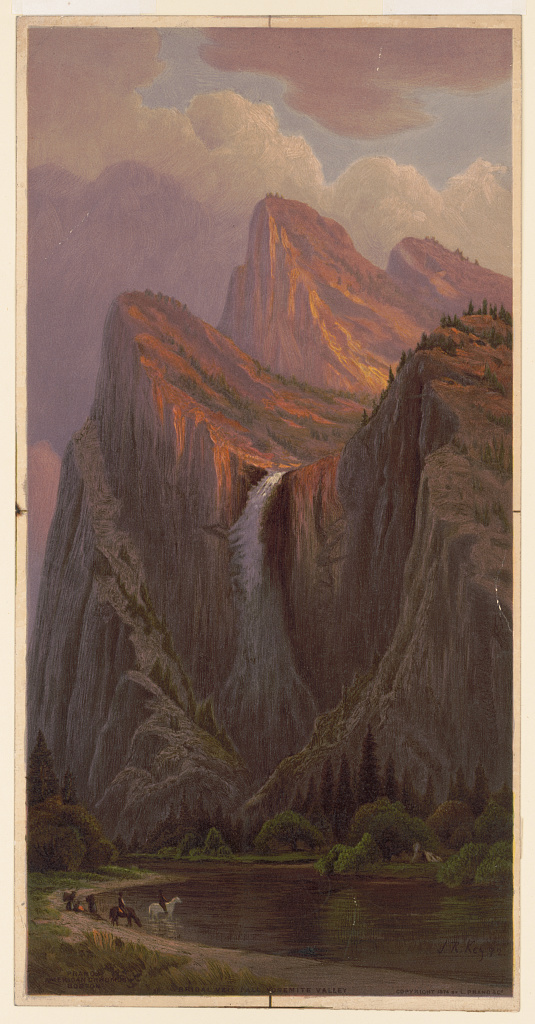 From the margin of these glorious forests the first general view of the Valley used to be gained—a revelation in landscape affairs that enriches one’s life forever. Entering the Valley, gazing overwhelmed with the multitude of grand objects about us, perhaps the first to fix our attention will be the Bridal Veil, a beautiful waterfall on our right. Its brow, where it first leaps free from the cliff, is about 900 feet above us; and as it sways and sings in the wind, clad in gauzy, sun-sifted spray, half falling, half floating, it seems infinitely gentle and fine; but the hymns it sings tell the solemn fateful power hidden beneath its soft clothing.

The Bridal Veil shoots free from the upper edge of the cliff by the velocity the stream has acquired in descending a long slope above the head of the fall. Looking from the top of the rock-avalanche talus on the west side, about one hundred feet above the foot of the fall, the under surface of the water arch is seen to be finely grooved and striated; and the sky is seen through the arch between rock and water, making a novel and beautiful effect.

Under ordinary weather conditions the fall strikes on flat-topped slabs, forming a kind of ledge about two-thirds of the way down from the top, and as the fall sways back and forth with great variety of motions among these flat-topped pillars, kissing and plashing notes as well as thunder-like detonations are produced, like those of the Yosemite Fall, though on a smaller scale.

The rainbows of the Veil, or rather the spray- and foam-bows, are superb, because the waters are dashed among angular blocks of granite at the foot, producing abundance of spray of the best quality for iris effects, and also for a luxuriant growth of grass and maiden-hair on the side of the talus, which lower down is planted with oak, laurel and willows.

On the other side of the Valley, almost immediately opposite the Bridal Veil, there is another fine fall, considerably wider than the Veil when the snow is melting fast and more than 1000 feet in height, measured from the brow of the cliff where it first springs out into the air to the head of the rocky talus on which it strikes and is broken up into ragged cascades. It is called the Ribbon Fall or Virgin’s Tears. During the spring floods it is a magnificent object, but the suffocating blasts of spray that fill the recess in the wall which it occupies prevent a near approach. In autumn, however when its feeble current falls in a shower, it may then pass for tears with the sentimental onlooker fresh from a visit to the Bridal Veil.

Just beyond this glorious flood the El Capitan Rock, regarded by many as the most sublime feature of the Valley, is seen through the pine groves, standing forward beyond the general line of the wall in most imposing grandeur, a type of permanence. It is 3300 feet high, a plain, severely simple, glacier-sculptured face of granite, the end of one of the most compact and enduring of the mountain ridges, unrivaled in height and breadth and flawless strength.

Across the Valley from here, next to the Bridal Veil, are the picturesque Cathedral Rocks, nearly 2700 feet high, making a noble display of fine yet massive sculpture. They are closely related to El Capitan, having been eroded from the same mountain ridge by the great Yosemite Glacier when the Valley was in process of formation.

You’re reading a preview of an online book. Buy it now for lifetime access to expert knowledge, including future updates.
If you found this post worthwhile, please share!
Related sections
Climate and Weather
A Wonderful Winter Scene
The Ancient Yosemite Glaciers: How the Valley Was Formed
Two-Day Excursions No. 2