Long ago before I had traced this fine stream to its head back of Mount Hoffman, I was eager to reach the extreme verge to see how it behaved in flying so far through the air; but after enjoying this view and getting safely away I have never advised any one to follow my steps. The last incline down which the stream journeys so gracefully is so steep and smooth one must slip cautiously forward on hands and feet alongside the rushing water, which so near one’s head is very exciting. But to gain a perfect view one must go yet farther, over a curving brow to a slight shelf on the extreme brink. This shelf, formed by the flaking off of a fold of granite, is about three inches wide, just wide enough for a safe rest for one’s heels. To me it seemed nerve-trying to slip to this narrow foothold and poise on the edge of such precipice so close to the confusing whirl of the waters; and after casting longing glances over the shining brow of the fall and listening to its sublime psalm, I concluded not to attempt to go nearer, but, nevertheless, against reasonable judgment, I did. Noticing some tufts of artemisia in a cleft of rock, I filled my mouth with the leaves, hoping their bitter taste might help to keep caution keen and prevent giddiness. In spite of myself I reached the little ledge, got my heels well set, and worked sidewise twenty or thirty feet to a point close to the out-plunging current. Here the view is perfectly free down into the heart of the bright irised throng of comet-like streamers into which the whole ponderous volume of the fall separates, two or three hundred feet below the brow. So glorious a display of pure wildness, acting at close range while cut off from all the world beside, is terribly impressive. A less nerve-trying view may be obtained from a fissured portion of the edge of the cliff about forty yards to the eastward of the fall. Seen from this point towards noon, in the spring, the rainbow on its brow seems to be broken up and mingled with the rushing comets until all the fall is stained with iris colors, leaving no white water visible. This is the best of the safe views from above, the huge steadfast rocks, the flying waters, and the rainbow light forming one of the most glorious pictures conceivable.

The Yosemite Fall is separated into an upper and a lower fall with a series of falls and cascades between them, but when viewed in front from the bottom of the Valley they all appear as one. 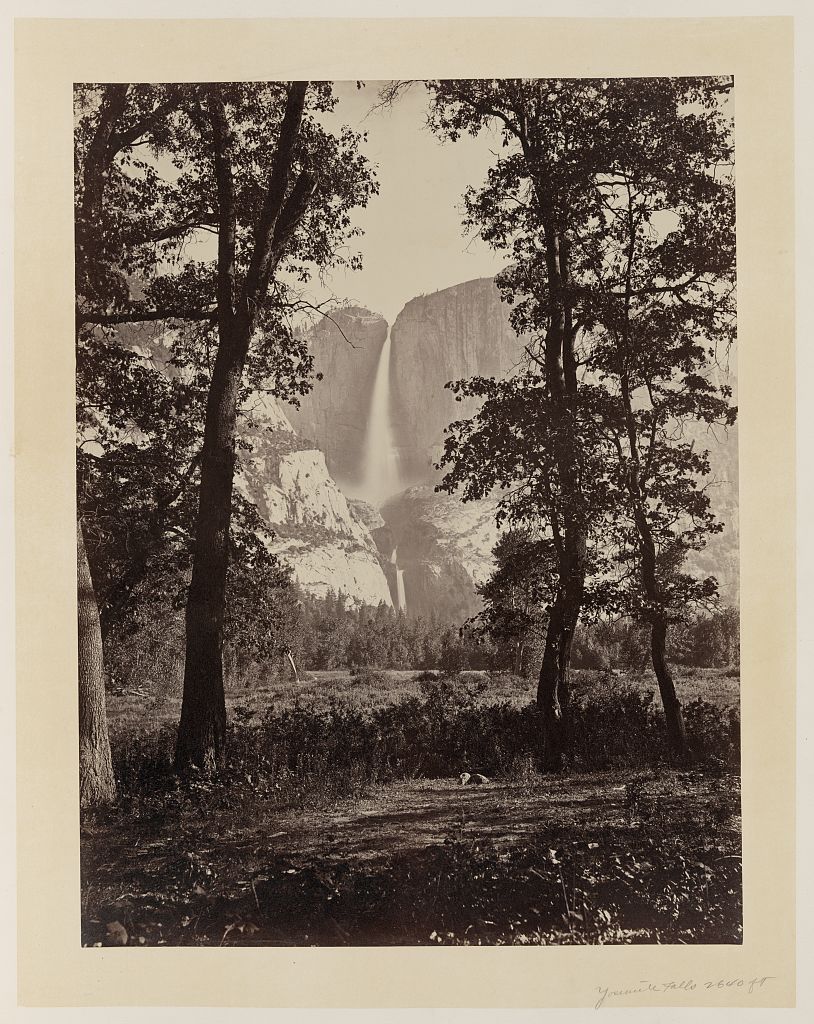 So grandly does this magnificent fall display itself from the floor of the Valley, few visitors take the trouble to climb the walls to gain nearer views, unable to realize how vastly more impressive it is near by than at a distance of one or two miles.

The views developed in a walk up the zigzags of the trail leading to the foot of the Upper Fall are about as varied and impressive as those displayed along the favorite Glacier Point Trail. One rises as if on wings. The groves, meadows, fern-flats and reaches of the river gain new interest, as if never seen before; all the views changing in a most striking manner as we go higher from point to point. The foreground also changes every few rods in the most surprising manner, although the earthquake talus and the level bench on the face of the wall over which the trail passes seem monotonous and commonplace as seen from the bottom of the Valley. Up we climb with glad exhilaration, through shaggy fringes of laurel, ceanothus, glossy-leaved manzanita and live-oak, from shadow to shadow across bars and patches of sunshine, the leafy openings making charming frames for the Valley pictures beheld through gem, and for the glimpses of the high peaks that appear in the distance. The higher we go the farther we seem to be from the summit of the vast granite wall. Here we pass a projecting buttress hose grooved and rounded surface tells a plain story of the time when the Valley, now filled with sunshine, was filled with ice, when the grand old Yosemite Glacier, flowing river-like from its distant fountains, swept through it, crushing, grinding, wearing its way ever deeper, developing and fashioning these sublime rocks. Again we cross a white, battered gully, the pathway of rock avalanches or snow avalanches. Farther on we come to a gentle stream slipping down the face of the Cliff in lace-like strips, and dropping from ledge to ledge—too small to be called a fall—trickling, dripping, oozing, a pathless wanderer from one of the upland meadow lying a little way back of the Valley rim, seeking a way century after century to the depths of the Valley without any appreciable channel. Every morning after a cool night, evaporation being checked, it gathers strength and sings like a bird, but as the day advances and the sun strikes its thin currents outspread on the heated precipices, most of its waters vanish ere the bottom of the Valley is reached. Many a fine, hanging-garden aloft on breezy inaccessible heights owes to it its freshness and fullness of beauty; ferneries in shady nooks, filled with Adiantum, Woodwardia, Woodsia, Aspidium, Pellaea, and Cheilanthes, rosetted and tufted and ranged in lines, daintily overlapping, thatching the stupendous cliffs with softest beauty, some of the delicate fronds seeming to float on the warm moist air, without any connection with rock or stream. Nor is there any lack of colored plants wherever they can find a place to cling to; lilies and mints, the showy cardinal mimulus, and glowing cushions of the golden bahia, enlivened with butterflies and bees and all the other small, happy humming creatures that belong to them.

After the highest point on the lower division of the trail is gained it leads up into the deep recess occupied by the great fall, the noblest display of falling water to be found in the Valley, or perhaps in the world. When it first comes in sight it seems almost within reach of one’s hand, so great in the spring is its volume and velocity, yet it is still nearly a third of a mile away and appears to recede as we advance. The sculpture of the walls about it is on a scale of grandeur, according nobly with the fall plain and massive, though elaborately finished, like all the other cliffs about the Valley.

In the afternoon an immense shadow is cast athwart the plateau in front of the fall, and over the chaparral bushes that clothe the slopes and benches of the walls to the eastward, creeping upward until the fall is wholly overcast, the contrast between the shaded and illumined sections being very striking in these near views.