You’re reading an excerpt of The Holloway Guide to Remote Work, a book by Katie Wilde, Juan Pablo Buriticá, and over 50 other contributors. It is the most comprehensive resource on building, managing, and adapting to working with distributed teams. Purchase the book to support the author and the ad-free Holloway reading experience. You get instant digital access, 800 links and references, a library of tools for remote-friendly work, commentary and future updates, and a high-quality PDF download.

There is no one-size-fits-all formula for remote work. The forms it takes depend on the size, stage, and philosophy of each organization, and will change as a company grows and matures. Often, remote work is framed in the context of people working from home and not having to commute; however, any company that has multiple offices deals with many of the same challenges (and may more accurately be described as a distributed company, as described below). Once an office expands beyond a single floor, the nature of how people work together inherently changes. Remote work largely exaggerates those changes, and successful remote teams depend on more attention being paid to them.

​confusion​Terminology about remote work is fraught with debate and inconsistency. Despite the fact that there’s a growing movement behind using the term distributed over remote—notably, viewing team members as remote can have hierarchical implications about what is “central” and what is not—for the purposes of this guide we will use “remote work” throughout to refer to the broad category, and draw distinctions about fully distributed companies or teams when relevant.

It’s also tempting to categorize companies as “remote or not” in a binary fashion, or perhaps as a point along a continuum between those two ends. Andreas Klinger, Head of Remote at AngelList, thinks about remote work as a space within a grid, where one axis is how close people are to the next hub or HQ (if one exists), and the other is how distributed across time zones individual teams or people are.* All other things being equal, a company with remote employees clustered near typical urban hubs within U.S. time zones has a different set of constraints, requirements, and pain points than one with remote employees scattered across the globe.

A few more terms are worth clarifying before we proceed. Remote companies are described in a variety of ways:

A single office company (or co-located company) has a single physical office location where everyone works regularly.

A multi-office company has different offices (not necessarily in the same location), and employees commute to the nearest location regularly. Offices outside the same location are often referred to as satellite offices. This type of company could also feasibly be considered distributed, but is not the same as a fully distributed company.

A hybrid company has at least one physical location where some employees work regularly, and also allows people to work regularly outside that location, typically from home.

A fully remote company (or fully distributed company or all-remote company) does not have a physical office location and all employees, including executives, work remotely. Such a company may not have started out fully remote, but moved to that model at some point.

A remote-first company originated as a fully remote company, having never had an office. This model is increasingly common with early-stage startups.

A remote-friendly company is a hybrid company that allows and supports remote work to a certain extent. The company is open to hiring people remotely but still tends to maintain core working hours and time zone overlap with one or more of its offices.

There’s not much data on whether one form of remote company is more prevalent than any other, but research by Buffer and AngelList suggests that the hybrid model is currently the most common. Their 2020 State of Remote Work report found that about 30% of the people they surveyed were all-remote—that is, they worked for a company where no one goes into an office. The majority case is a hybrid model, where part of the team is full-time remote and the remainder work out of the same office. 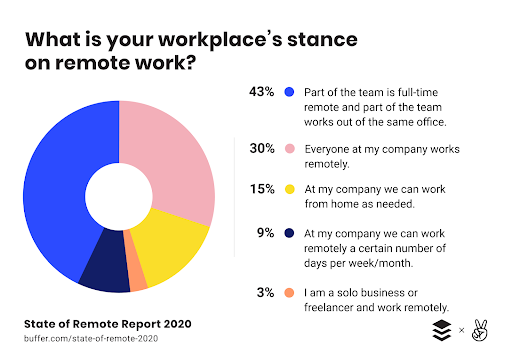 This aligns with the information available on AngelList about the remote makeup of companies listed there: companies with “any remote setup allowed” is around 9K, whereas “the team is all-remote” comes in closer to 3K (where the latter is a part of the former).*

Rodolphe Dutel, founder of Remotive, a platform for companies to hire remote workers and for workers to find remote jobs, confirms that around 20-30% of the companies he’s tracking are all-remote. According to their numbers, around one third of all teams that consider themselves remote-friendly are all-remote, and the rest comprise some degree of hybrid remote-friendliness.*

​controversy​While there is a lively and ongoing debate about which type of remote company culture is “best”—all-remote, remote-first, hybrid***—and whether largely distributed teams are more successful, our view is that this misses the point. There are many examples of high- and low-performing companies that have operated in remote-only and hybrid models, within one country, and across the globe. What matters most is that a remote company’s culture and communication practices are intentional, and in line with its stated values.

A remote worker is someone who does not commute into an office daily, and instead works from a location of their choosing, typically their home or a co-working space or coffee shop.

A digital nomad is someone (a full-time employee, a contractor, or a freelancer) who does not commute into an office but instead travels intentionally to multiple locations and works from wherever they are at the time.

A freelancer is someone who is not a full-time employee of a company, but is instead contracted to perform work for a specified rate and duration of time. They are typically self-employed, though some work through employment agencies, and most work from whatever location they choose. Some freelancers may go into a company’s office to conduct their work, though not usually on a regular basis. Freelancers are similar to contractors (and for tax and payroll considerations, they are effectively the same), but contractors typically work full time for a set period with a single client for the duration of the contract. Employers do not provide benefits ( healthcare, parental leave, or the like) to freelancers or contractors.

​important​It’s worth noting that many international employees of remote companies are instead contractors due to the complexities of overseas tax and payroll requirements (among other challenges). We cover these in detail in Legal, Tax, and Operational Concerns.

Working from home (or work from home or WFH) is the most common form of remote work. The term WFH can also describe a company policy that allows employees to occasionally avoid commuting into the office and conduct their work from home or wherever they choose. WFH is typically considered to be a benefit or perk, rather than a consistent work arrangement.

Teleworking (or telecommuting) is one of the earliest terms coined to describe the practice of working somewhere other than the main company office.* At the time, this largely referred to working from home, often using phone calls and even faxes to communicate, as this was before the advent and broad spread of e-mail and public internet availability.

Concerns about productivity used to be one of the foremost roadblocks for companies considering supporting remote work. Anecdotally, we’re seeing this decrease somewhat in the list of worries for companies; but for many it’s still not a foregone conclusion that remote work means individuals or teams will be more productive.* Despite that, improved productivity (typically expressed as a lack of interruptions) continues to be one of the main reasons remote employees prefer working outside an office.*

​caution​But despite what a quick Google search will tell you, there’s not a lot of concrete data on whether remote work is really a win-win situation for employees and companies. There’s an endless supply of blog posts telling you that “remote workers are more productive,” but if you dig in, nearly all of them are either: