Overview of the Hiring Funnel

Overview of the Hiring Funnel

Between posting a job ad and onboarding a new employee, it takes many steps to help a company gain confidence that a candidate is a good fit and for the candidate to decide the company is right for them. This fundamental part of the recruiting process is called the hiring funnel.

​Definition​ The hiring funnel (or funnel) is the series of stages through which a candidate’s consideration for employment progresses. It’s called a “funnel” because of the shape and by analogy with the traditional purchase funnel: many candidates enter the funnel, but few proceed through all the stages and are hired. Candidates enter at the top of the funnel through multiple sources. At the bottom, they accept an offer you have extended for them to join your company. A candidate’s exit from the funnel at any stage can be prompted by the candidate themself or by the company. Moving forward at each stage occurs by mutual agreement.

For each role, a company will typically have multiple candidates in the funnel at different stages. And many of these candidates are likely to be exploring and interviewing with several companies at the same time. 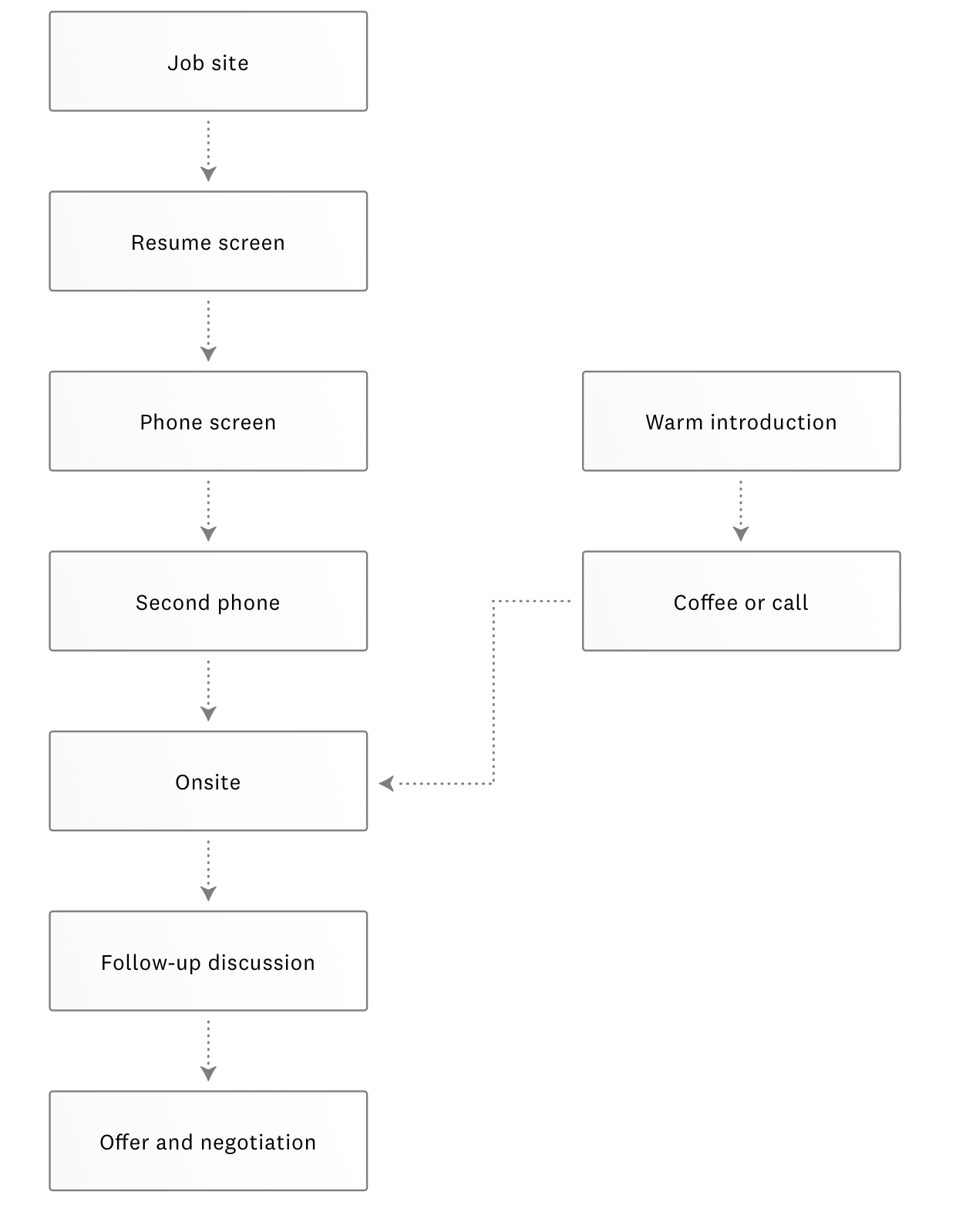 Stages of the Funnel

The funnel might look different from company to company and even candidate to candidate. For instance, at a small startup, a founder or CTO might simply reach out to someone they have worked with closely before and convince them to join the company. The entire process may be a few meetings and a lunch with the team.* At a large, mature company, the process will likely be more formal and involve the following:

​caution​ At larger companies, the recruiting process can get complicated. There might be multiple people accountable for different stages of the funnel. There might also be different paths a candidate can take through the funnel (for instance, maybe candidates who don’t do well enough on a technical phone screen to warrant an on-site interview and not poorly enough to be rejected are invited to take a coding challenge).

Whether you’re designing a new process or documenting an existing one, flowcharts provide a visual way to align your team on the hiring process. In fact, when teams try to put together a flowchart of their established (and, they believe, clearly understood) process, they are often surprised to discover that not everyone expects the same things (“I thought everyone gets a HackerRank challenge?”… “No, we skip those if the candidate is a referral”). Many teams are also surprised at how complex their process has become over time, and the flowchart is a great way to identify areas that might be simplified or improved.

Unlock expert knowledge.
Learn in depth. Avoid pitfalls. Get lifetime online access to the entire book, plus a download you can keep. 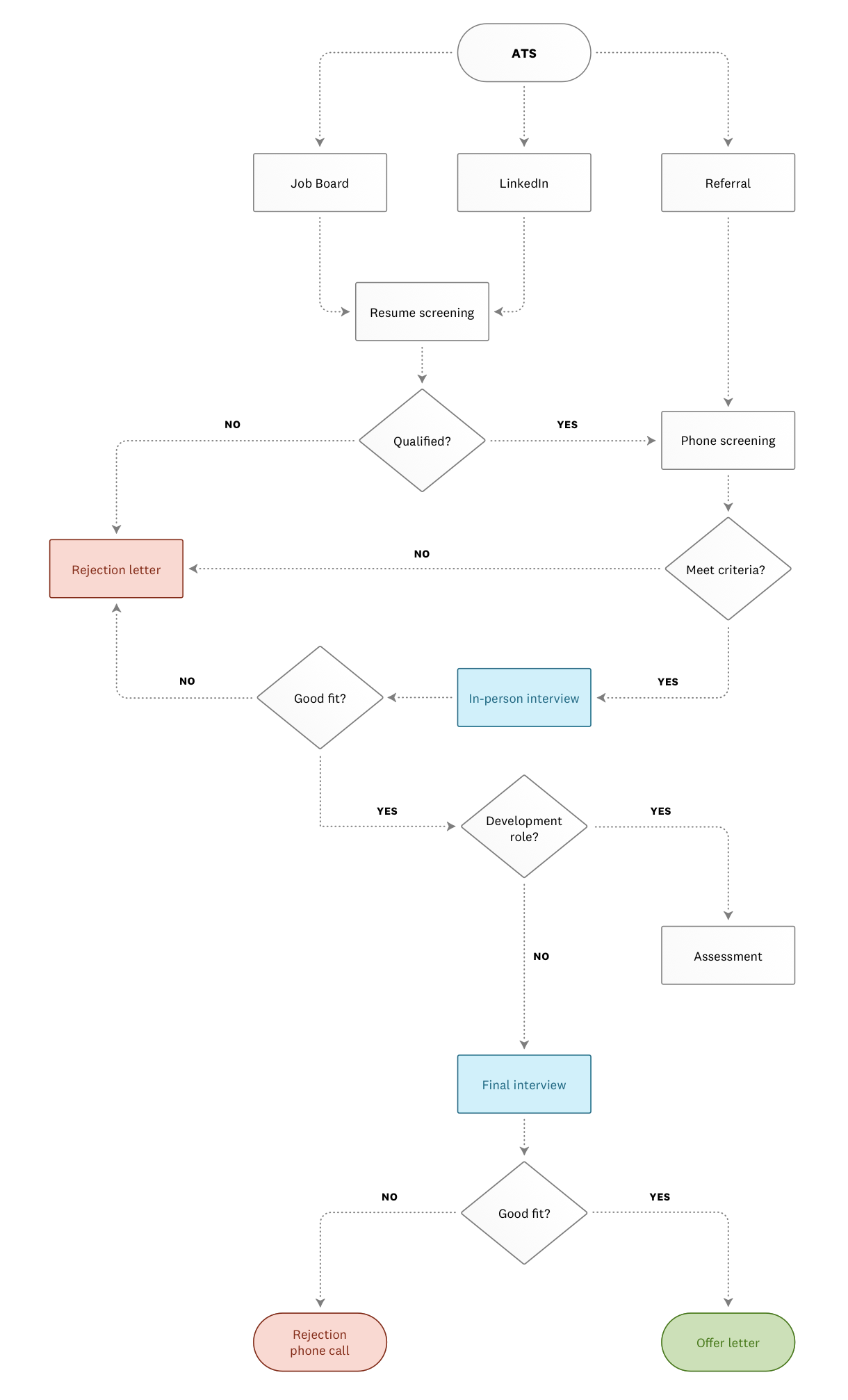 This Hire by Google flowchart is a good overview; we’d recommend taking it a step further by indicating who is responsible for each stage or decision, and agree on timing around how long each stage should take.

It’s important to have a set of metrics that you can use to evaluate, diagnose, and improve your hiring funnel. Metrics can also help you predict whether your activities are putting you on track to hit your hiring goals. There is no single metric that encompasses the health of the funnel. We present several commonly used metrics that, combined, can help you understand how your recruiting process is functioning.

Reviewing the number of candidates, or volume of candidates, at each stage gives a broad sense of your hiring funnel. Because this metric is easy to calculate, and it’s hard to have any insight without it, most companies will review their volume regularly.

The offer acceptance rate measures the percentage of candidates who accept an offer of employment from the company, whether before or after negotiating the offer’s terms, and is a particularly commonly used conversion rate.

Conversion rates give you a breakdown of where you lose candidates in your funnel. A low conversion rate at one stage might indicate that you are judging candidates too harshly (or incorrectly) at that stage, but it could also indicate that you are being too lenient in preceding stages. It’s also important to break down the loss at each stage by the major force behind it: whether it was company-driven (you decided not to move forward with a candidate) or candidate-driven (candidates could be pulling out of your process due to a poor experience). 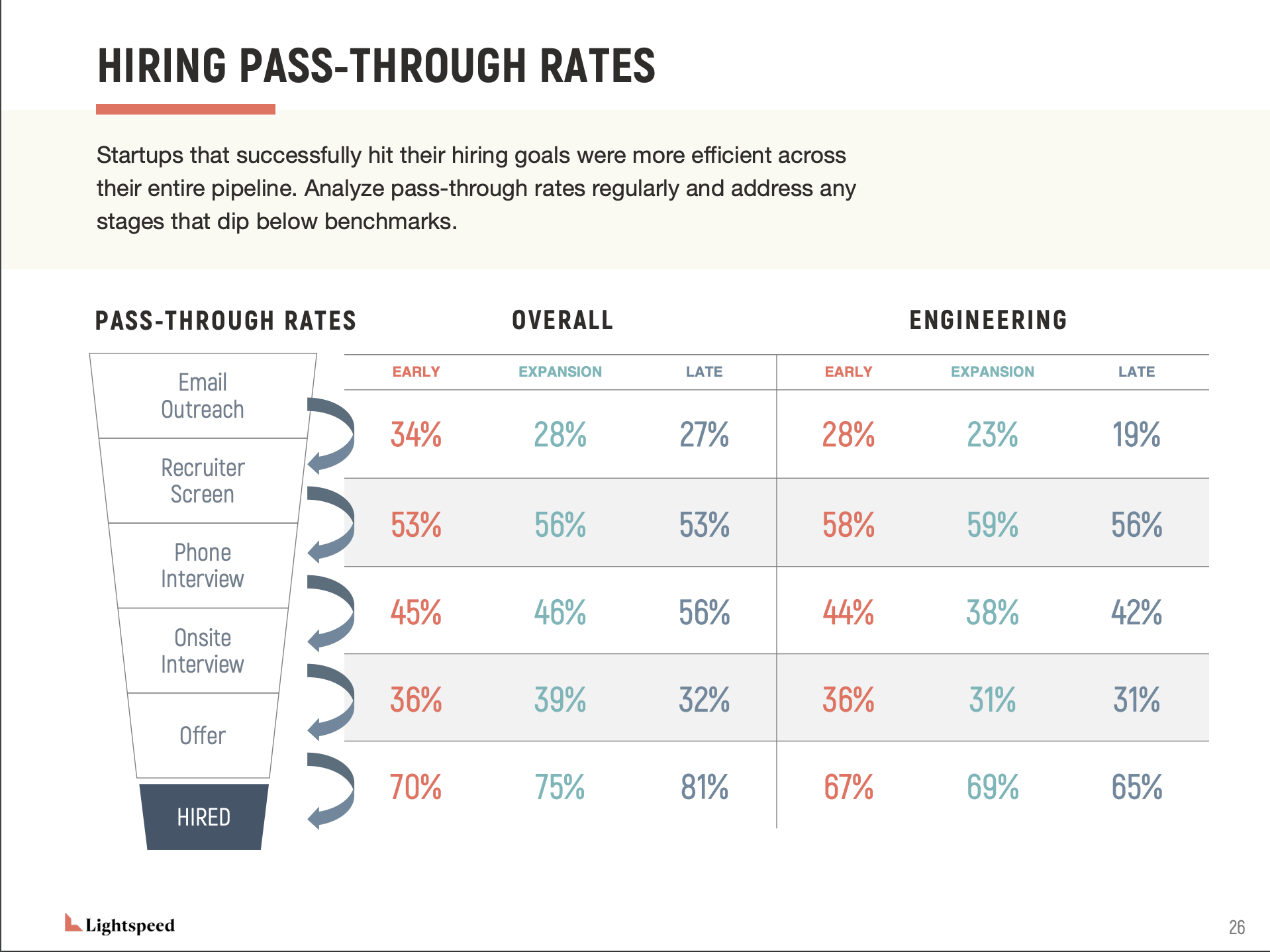 Efficiency metrics in hiring and recruiting measure the rate and cost of candidate progression through a hiring funnel. These metrics can be used for planning (knowing how long, on average, it takes to fill a position) and budgeting (deciding how much to budget for recruiting in the future).

Time-based metrics, such as time-to-fill or time-to-hire, are an efficiency metric that measures how quickly candidates move through a hiring funnel. Time end-to-end can be measured, or, for more fine-tuned diagnostics, the time between any two stages can be measured (for instance, maybe the team takes too long to schedule interviews).

Cost per hire is an efficiency metric that measures the financial expenditure required to fill an open position. Standardized ways of calculating cost-per-hire divide total expenditures by the number of hires, but any meaningful method can be used. For instance, Aline Lerner encourages engineering functions to calculate the cost of engineering time (interviewing, writing feedback, debriefing) per hire because this makes up a bulk of hiring costs. Many components of cost-per-hire are tightly coupled to conversion rates—in general, the earlier you can weed out candidates who wouldn’t have been a fit, the less time and money you will spend on them.

​caution​Some companies use efficiency metrics to judge how their recruiting function is performing—but they don’t capture the actual value your process is producing. You could be hiring candidates quickly and cheaply, only to later realize that they aren’t a fit for your company, and be forced to start again.

Quality of hire is an effectiveness metric that attempts to provide a more holistic metric by looking at the value created by new employees. There’s no single, standard way of measuring this, but most variations look at how an employee is faring some time after being hired by considering data like performance reviews, employee engagement surveys, or retention. Downsides of the quality-of-hire metric are that it takes a long time to measure and may conflate candidates’ quality with factors outside their control, such as on-boarding and new-hire management.

Candidate-driven metrics are an effectiveness metric gathered through surveys, which can help measure the candidate experience and provide further insight into possible improvements in your process. These metrics can be as simple as calculating a Net Promoter Score (NPS) or include more in-depth questions about a candidate’s experience. Larger companies might administer these surveys formally, but sometimes a simple, informal debrief with a subset of your candidates will help surface issues.

Smaller companies might opt to look at just a subset of these metrics. For instance, some startups might just look at funnel volume and offer acceptance rates on a regular basis, and only calculate other metrics should the need arise.

Larger companies may calculate many more metrics, and might even segment them in different ways:

Metrics are only as valuable as they are useful in helping you improve your processes. “A Modern Take on Data-Driven Recruiting from a Google Recruiting Lead” debunks a few myths about some of the more commonly used metrics and goes into detail about how to use past data to improve your future hiring performance.

The tech industry is increasingly powering businesses around the globe, and creating products that dramatically impact people’s lives. And yet, it is an industry that does not reflect the broader population. Women make up 57% of the U.S. workforce as a whole but only 26% of the technical workforce. Black, Latina, and Native American women make up 16% of the U.S. workforce and hold only 4% of tech jobs.* Pay gaps by gender and race persist. While 83% of tech executives are white, only 10% are women.** Asian and Asian American men make up 32% of the tech workforce, but only 20% hold executive positions; while Asian and Asian American women make up 15% of the workforce, they hold only 5% of executive roles in tech.

The problem, however, goes beyond race and gender, and is more pervasive than the statistics presented by Information is Beautiful. Data on race and gender are the easiest to collect, but harassment and discrimination affect workers based on their caregiver status, immigration status, gender identity, sexual orientation, and disability status.

You’re reading a preview of an online book. Buy it now for lifetime access to expert knowledge, including future updates.
If you found this post worthwhile, please share!
Related sections
The Tech Industry: By the Numbers
Desired Traits and Values
Hands-on Coding Interviews
Decision-Making Archetypes
Unlock expert knowledge.
Learn in depth. Avoid pitfalls. Get lifetime online access to the entire book, plus a download you can keep.