Five essential guides for early startups, written by entrepreneurs with decades of experience. Comprehensive, practical, and filled with insights from top startup leaders.

Equity Compensation(
$25value
)Raising Venture Capital(
$100value
)Remote Work(
$35value
)Technical Recruiting and Hiring(
$75value
)Founding Sales(
$40value
)
$275 value
$195
Written by professionals who have worked at dozens of top companies...
Invaluable—it gives you the kind of insight and wisdom that is usually only found through hard earned experience, right at your fingertips.Adam Jacob(Co-Founder of Chef, on Technical Recruiting and Hiring)

In the early days of your startup, every decision counts. Fundraising. Equity. Hiring. Sales. Culture. The choices you make today will determine the outcome of your company—of your success or failure.

Where will you turn for advice when it matters most?

The Startup Foundations Bundle includes five essential guides for navigating the most challenging parts of building a new business:

Each guide includes the collective wisdom of dozens of entrepreneurs with decades of experience, from dozens of startups and successful companies like Buffer, Stripe, Facebook, Dropbox, Google, and Quora, as well as top venture funds and law firms. They are as comprehensive as they are practical, helping you make better decisions that set your company up for success. Get lifetime access to each online book, future updates, bookmarks, highlighting, commentary, and all other digital resources included with the title.

Founders shouldn’t have to figure fundraising out the hard way when they can learn from those who have already been through the process. The Holloway Guide to Raising Venture Capital is full of practical advice that will be helpful to any entrepreneur.
Brad Feld (Foundry Group, on Raising Venture Capital)
This is the first thing I share when someone is thinking about their equity compensation.
Ryley Reynolds (Thrive Capital, on Equity Compensation)
Without a doubt, this guide is the best resource I’ve read on technical hiring, by a substantial margin.
KELLAN ELLIOTT-MCCREA (Dropbox, formerly Blink Health, Etsy, on Technical Recruiting and Hiring)
Predictable Revenue introduced the world to scalable outbound sales. But it won’t work without a solid foundation. Founding Sales helps founders and other first-time sellers go from a dead stop to first gear in sales (the hardest part). Time after time first time founders and sellers try to sell and grow sales too fast, leading to failure. Founding Sales gets you started, building that foundation first so you’re prepared to scale later.
AARON ROSS (author, Predictable Revenue, on Founding Sales)
Everyone has written a guide on remote work—but no one has done so as diligently and comprehensively as Holloway. They’ve spoken to everyone who knows about remote work, and do not shy away from what’s tough or complex.
JOB VAN DER VOORT (CEO, Remote, on Remote Work)

Matthew Howells-Barby
@matthewbarby
The@hollowaybooksaresomeofthebestprimersoncomplextopicsI’veevercomeacross.Beautifulonlinereadingexperiencetoo.
Farid Mheir
@fmheir
Lookingforwardtoreadthe“GuidetoTechnicalRecruitingandHiring”by@Holloway-ifitisasgoodastheothersonequitycompensationandraisingventurecapital,itshouldbeamazingandmuchneededhttp://sco.lt/7OLcP2
Matthew 𝕊t◎tts
@mlstotts
IcouldreadonlineforeverifitwereUX’dlike@holloway.
Hum
@humrashid
Holyhell.HowamIJUSTstumblingacross@hollowayrightnow?ThisiswhatcuratedexpertpapersshouldbeforEVERYTHING.
CanwegetyourteamtoreformattheentirewebintothispleasantUXexperienceplease?:)
Ksenia Burlachenko
@ksenish
IamashamedtoadmitthatIonlylearnedabout@hollowaythisweek.HOWISTHISPOSSIBLE?Theirmaterialis✨fantastic✨BoughtseveralbooksalreadyandsharedafewexcerptswithcolleaguesfromtheGuidetoTechnicalRecruitingandHiring
Aleksandra
@aleks_muse
Reallyenjoyinghowwell-writtenandinformativethe@hollowayguidesare.Finishedthe“GuidetoTechnicalRecruitingandHiring”and“EquityCompensation”andIcantotallyrecommendthem.
David Sherry
@_brandswell
IneedmoretimeinmylifesoIcanreadallof@hollowayguides
About the Authors
Andy Sparks
The Holloway Guide to Raising Venture Capital
Andy Sparks is an executive coach to startup leaders, a writer, and an entrepreneur. He is the former CEO of Holloway, a digital book publisher, and the former COO of Mattermark, a business analytics and database company used by venture capitalists to source deals. In his career as an entrepreneur, he raised more than $20M in venture capital. Andy felt it was important to write this book after having moved to Silicon Valley from Ohio without a network, as he pieced together how fundraising works from hundreds of conversations, hours of internet searches, multiple $900 sessions with lawyers, and a slew of other books. He hopes his writing can give founders the tools to make decisions that are good for their businesses, their teams, and themselves.
Joshua Levy
The Holloway Guide to Equity Compensation
Joshua Levy is co-founder of Holloway, a digital publishing startup. He has authored and edited online works in business and engineering that have reached over a million readers. Josh has built software and led technical teams in Silicon Valley for 15 years at BloomReach, Cuil, Viv Labs (sold to Samsung), and SRI (on the technology that led to Siri). His interests include typography and design, knowledge and collaboration systems, AI, web search, cloud infrastructure, and open source.
Joe Wallin
The Holloway Guide to Equity Compensation
Joe Wallin is a Seattle-based corporate lawyer who represents startups, investors and lenders in startups, founders, and executives. Joe has been working in the early-stage company space since the late 1990s. He is a member of the Angel Capital Association’s public policy advisory council, where he is actively involved in trying to make the law better for investors and founders. Joe has written for The Wall Street Journal, PandoDaily, GeekWire, and Xconomy, and blogs at The Startup Law Blog.
Katie Wilde
The Holloway Guide to Remote Work
Katie Wilde is VP of Engineering for Buffer, a globally remote company with 90 teammates in 19 countries.
Juan Pablo Buriticá
The Holloway Guide to Remote Work
Juan Pablo Buriticá is a software engineering leader who has built and led distributed teams for over a decade. He leads the LatAm Engineering organization at Stripe, focused on building financial infrastructure in the region. Juan Pablo has built high-performing software engineering organizations by emphasizing Open Source software values, technical excellence, trust, and empathy. He has also organized more than 10 software engineering conferences in the U.S. and Latin America, founded multiple JavaScript meetups, and led the growth of Colombia’s JavaScript community, now one of the largest Spanish-speaking JavaScript communities in the world. He is originally from Bogotá, Colombia and lives in New York City.
Osman (Ozzie) Osman
The Holloway Guide to Technical Recruiting and Hiring
Osman (Ozzie) Osman is co-founder and head of engineering at Monarch Money. He has built products and engineering teams at companies including Quora and Google. Ozzie has also started two companies that have been acquired, and advised dozens of other startups. He is the lead author of the Holloway Guide to Technical Recruiting and Hiring.
Pete Kazanjy
Founding Sales
Pete Kazanjy is a serial founder, and seasoned early stage SaaS executive, advisor, and investor. Pete founded TalentBin, a category-defining talent search engine and recruiting CRM, which exited to Monster Worldwide in early 2014. Pete currently is the founder of Atrium, a proactive sales performance analysis solution. At TalentBin, Pete went from product and product marketing founder generalist, to first sales rep, first sales manager, first VP of Sales, all the way to leading new product sales for 600+ sales reps at Monster worldwide. Pete also founded and runs the canonical invite-only nationwide sales operations and management peer education community Modern Sales, featuring 13,000+ members from a who’s who of sales operations, enablement, management, and leadership from 5k+ leading sales organization’s. Additionally, Pete is a well known expert in early stage go-to-market and “founder selling”—helping organizations figure out their early critical positioning and selling activities. He has done substantial speaking and writing on the topic, including being a frequent contributor to First Round Review and Saleshacker, and advises a number of enterprise software companies on establishing and optimizing their sales and success motions.

We believe in a reading experience that goes beyond paper or e-books. Reading on Holloway means a distraction-free, interactive format to help you find what you need, when you need it, in your browser. Digital access means access to additional digital resources, future updates, curated commentary from experts and readers, and features like search and bookmarks.

​Definition​ A job requisition (or job requisition form) is an internal company document a manager uses to formally request permission to fill a role or position. These documents are particularly useful for coordination and wider alignment at larger companies. For instance, the requisition might require approval (often from finance, HR, and upper management) to ensure sufficient space and funding are available for a new hire. Once the requisition receives the necessary approvals, it can serve as the starting point for a discussion between the hiring manager and their designated recruiter (for instance, at a role intake meeting). 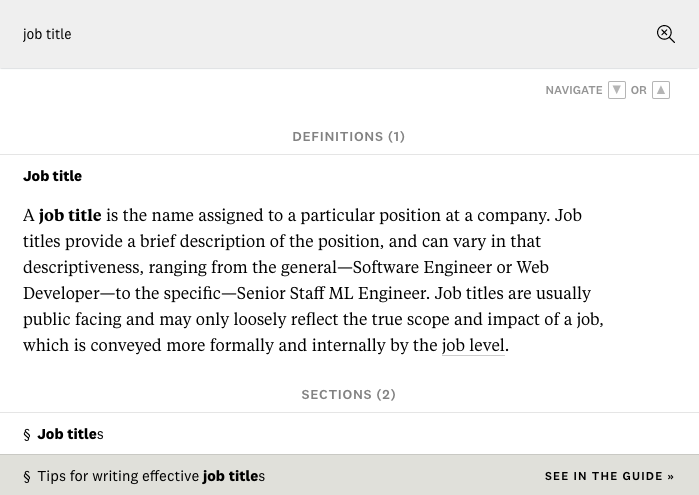 ​danger​️️ Wording in your job description can have unintended consequences in determining who applies. Attempts to make your roles sound more enticing can actually discourage people from applying. Researchers have found evidence that using gendered language contributes to an imbalanced pipeline of candidates; certain language can also discourage older candidates or candidates from marginalized communities from applying.

​confusion​People often confuse percentiles and percents, with serious consequences. When someone recommends compensating at the 75th percentile, they are talking about percentile rank, or paying at a rate that is greater than what 75% of companies pay for a role (in a given market, stage, et cetera). This is very different from paying 75% of what a fair market salary would be.

​controversy​The “best” interview format for coding questions is a notoriously controversial topic. While many companies rely primarily on onsite, face-to-face coding interviews, a significant fraction of engineers consider “whiteboard coding” to be intimidating, stressful, and not predictive of job performance. On the other hand, alternatives like take-home tasks have drawbacks as well.

Researched, written, and edited by experts.

Written by practitioners. Edited by professionals.

Keep in touch.
We’ll send early announcements of new books from Holloway, free excerpts, and offers available only on our email list.